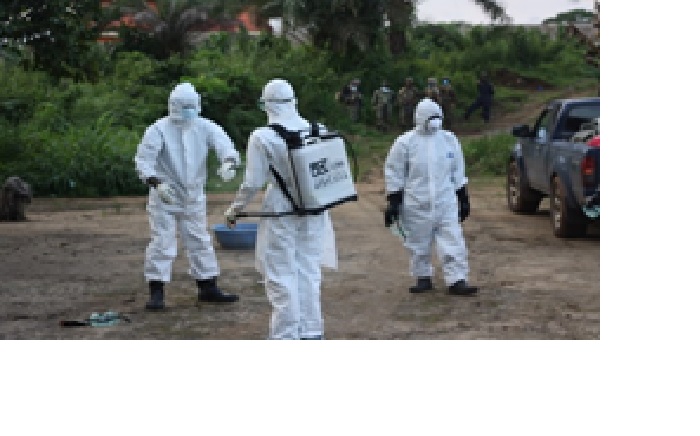 Editor’s Note: This report on conditions in Liberia during the current outbreak of the Ebola virus was written by John Kpehe Boimah, PE, an instructor in the Department of Civil Engineering at the University of Liberia and a geotechnical engineering consultant. Boimah earned a bachelor of science degree in civil engineering from the University of Detroit Mercy. He worked at the Michigan Department of Transportation for about 20 years before returning to his native Liberia. He was a member of The Engineering Society of Detroit while working for MDOT, and took ESD’s PE exam prep course. Today, his former UDM professor, Utpal Dutta, provides lecture materials and books for Boimah’s classes in Liberia.

The deadly Ebola viral disease has cause havoc in Liberia. Our government had no plan to handle the virus epidemic. The Ebola virus exposed our government’s weaknesses in handling disasters. Infrastructures (roads and medical facilities) were inadequate to handle the demands caused by the virus. Poor road conditions made it very difficult to get help to residences in the remotest areas of our country. Clinics and hospitals were unprepared to handle the case loads brought in daily. And with the virus causing devastation around the country, our government imposed a state of emergency and schools were closed indefinitely.

When the Ebola virus entered Liberia, it first appeared in the remote rural areas of our country where traditional practices are upheld strongly. Our government took it lightly and thought it would leave within a few weeks. The virus began to spread as mourners returned from burials. At these burials, especially for someone of status in the region, it is common practice for mourners to wash parts of their body with bath water in which the recently deceased person has been bathed. These traditional practices in some parts of the country were condemned as being one of the major causes of the virus spreading. This traditional practice has gone on for centuries. And as a result, many Liberians did not believe Ebola could be spread by washing parts of one’s body with water used to bathe their dead high priests.

Our government and her international partners developed the campaign that reads “Ebola is Real, No touching, no kissing and no eating.” This message created doubt in the minds of the general public. Most Liberians do not question the existence of the Ebola virus. The justification provided about the source or cause of the virus spreading is deeply being questioned. You will hear discussion about the source of the virus in local cafes or entertainment centers.

One of the major cases of death was the lack of roads connecting communities. Rural areas were not accessible by vehicles during the critical period of the outbreak because of the deplorable condition of roads. Getting help to patients were very challenging because of very bad roads or no roads at all to remote parts of the country. Sometimes, it meant transporting the sick by other means to an Ebola Treatment Unit (ETU). In some parts of the country, there are no ETUs. Even areas with hospitals were not prepared to handle the case load from the deadly Ebola virus.

Another cause of death has been the generalization of any sick person as having Ebola. The Ebola virus symptoms are similar to most of our common illnesses (malaria, typhoid and others). The early stage of the outbreak led to many medical practitioners getting the virus. Hospitals were forced to shut down because medical practitioners refused to work because of the lack of protective gear, hazard pay and insurance.

It was very shocking to realize that our health system did not have ambulances to transport the sick. Diagnostic equipment for analyzing blood samples for Ebola were lacking. Protective gear like gloves and personal protection equipment were not available. Medicines to treat sick patients were not available. The death rate started to increase daily. Medical practitioners were getting the virus and dying due to the lack of PPE. The virus was also spreading due to our traditional practices. Simply put, the virus overwhelmed our medical facilities and government.

Available treatment units could not handle the case loads. Sick patients were brought to ETUs and no beds were available for them. Many of the sick either went home, where they would die, or lay outside the ETU waiting to get help, where they would also die. The saving grace came when our international friends and partners flew in medical supplies from around the world. Many Liberians were very angry with our government. Our first line of defense against the virus, medical personnel, were falling victim to the virus and dying.

All educational institutions have been ordered closed since June for fear that the virus would be spread through student contacts. We had about three weeks for schools to close for the semester. Exams were not administered. The challenge now is how to handle the end of the semester and what to do with the current school semester that could not start due to the state of emergency. The virus caused a huge setback for seniors and for those students that had a semester to complete for graduation. Parents are complaining due to the lack of after school programs for students. There are no public libraries except at the U.S. Embassy and it is not for an academic setting. Activities to keep students involved were stopped for fear of the virus spreading.

In conclusion, Liberians have changed their habits to survive this epidemic. Many Liberians do not believe the Ebola virus is natural. Liberians are appreciative of our international partners, especially the United States and China, for coming to our aid in this desperate time of ours. The American military is using helicopters to drop medical supplies and food to remote areas, which is appreciated.