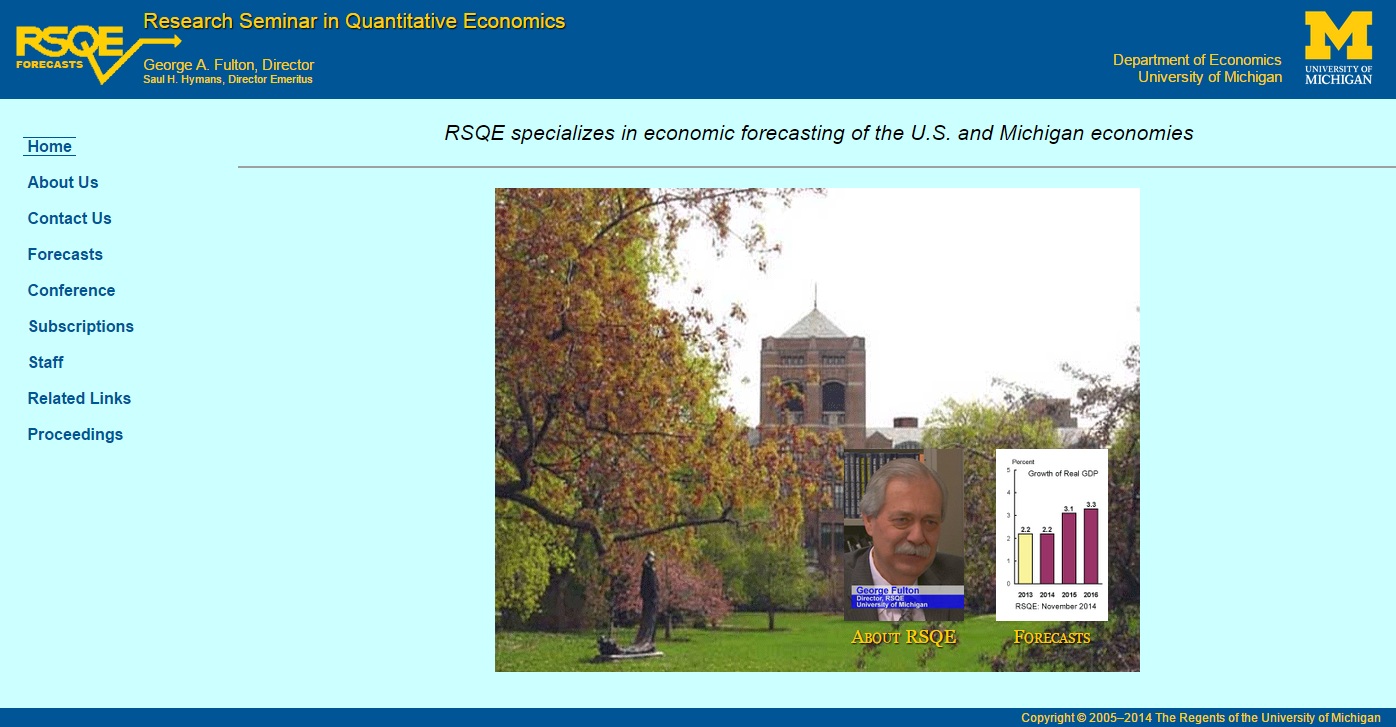 ANN ARBOR — The state of Michigan’s economic recovery, now five years old, will continue at least another two years, according to economists at the University of Michigan.

In their annual economic outlook, UM economists George Fulton and colleagues Joan Crary and Donald Grimes say they expect Michigan’s economy to create 59,400 new jobs in 2015 and 73,200 new jobs in 2016.

Professional and business services are expected to contribute a quarter of the jobs created in Michigan over the next two years, and two-thirds of those jobs are in the highly compensated professional, scientific, and technical subcategory.

“When we judge the progress of Michigan’s economy from a big-picture perspective, there are several positive story lines,” Fulton said. “More than 300,000 jobs were created over the past five years, the unemployment rate is about half of what it was five years ago, and the auto industry is booming with vehicle sales at their highest level in eight years. With the court’s approval of Detroit’s plan for the adjustment of its debts, the city is about to exit bankruptcy, creating excitement about a fresh start for Michigan’s largest city. And three major credit-rating agencies have upgraded Michigan’s outlook in the past few years. What all of this suggests is that the Michigan economy has gone some distance from the dire straits it was in five years ago, at least overall, but there is still a fair way to go.”

The construction industry will add 18,000 jobs over the next two years, while manufacturing is expected to gain 12,000 jobs during that time — down from an annual average of about 22,000 job gains from 2010 through 2014.

“As is typical in Michigan, manufacturing was one of the two sectors that led the state recovery during its earlier stages,” Grimes said. “The deceleration reflects the more mature stages of the recovery overall and our forecast of a smaller increase moving forward in Detroit Three light vehicle sales.”

Other major sectors projected to add jobs during 2015 and 2016 include health care (11,000 jobs) — the only major sector that has posted job gains every year since 1999, despite sluggish hiring the past two years — and government (1,000 jobs). All of the latter’s employment gains will occur in 2016, the first time since 2002 that government has added jobs.

While their forecast is cause for optimism, UM economists caution that Michigan continues to be among the states with the highest jobless rates, ranks in the bottom third in per capita personal income, lags in population growth among the young and college-educated adults, and is home to numerous residents not yet vested in the recovery.

As for inflation, the economists said it has hovered around 1.5 percent in Michigan in both 2013 and 2014. The recent sharp drop in oil prices, which are expected to remain low, is expected to hold inflation to a very low 1.1 percent for 2015.

A modest rise in labor costs and only modest increases in food and energy prices are expected to keep inflation restrained at 1.4 percent for 2016. That would mean local inflation is expected to run two- to three-tenths of a percentage point below the U.S. rate in 2014-16.

The economists expect personal income growth to rebound to 4.3 percent in 2014 from a scant 1.4 percent in 2013, reflecting in part a return to a steady payroll tax rate in 2014 following a jump in payroll taxes at the beginning of 2013 (a subtraction in calculating personal income). As employment strengthens, income growth is expected to accelerate to 4.6 to 4.7 percent per year in 2015-16.

However, real income growth is predicted to tick down to 2.8 percent in 2016 with slightly higher inflation and a little larger increase in federal personal taxes.