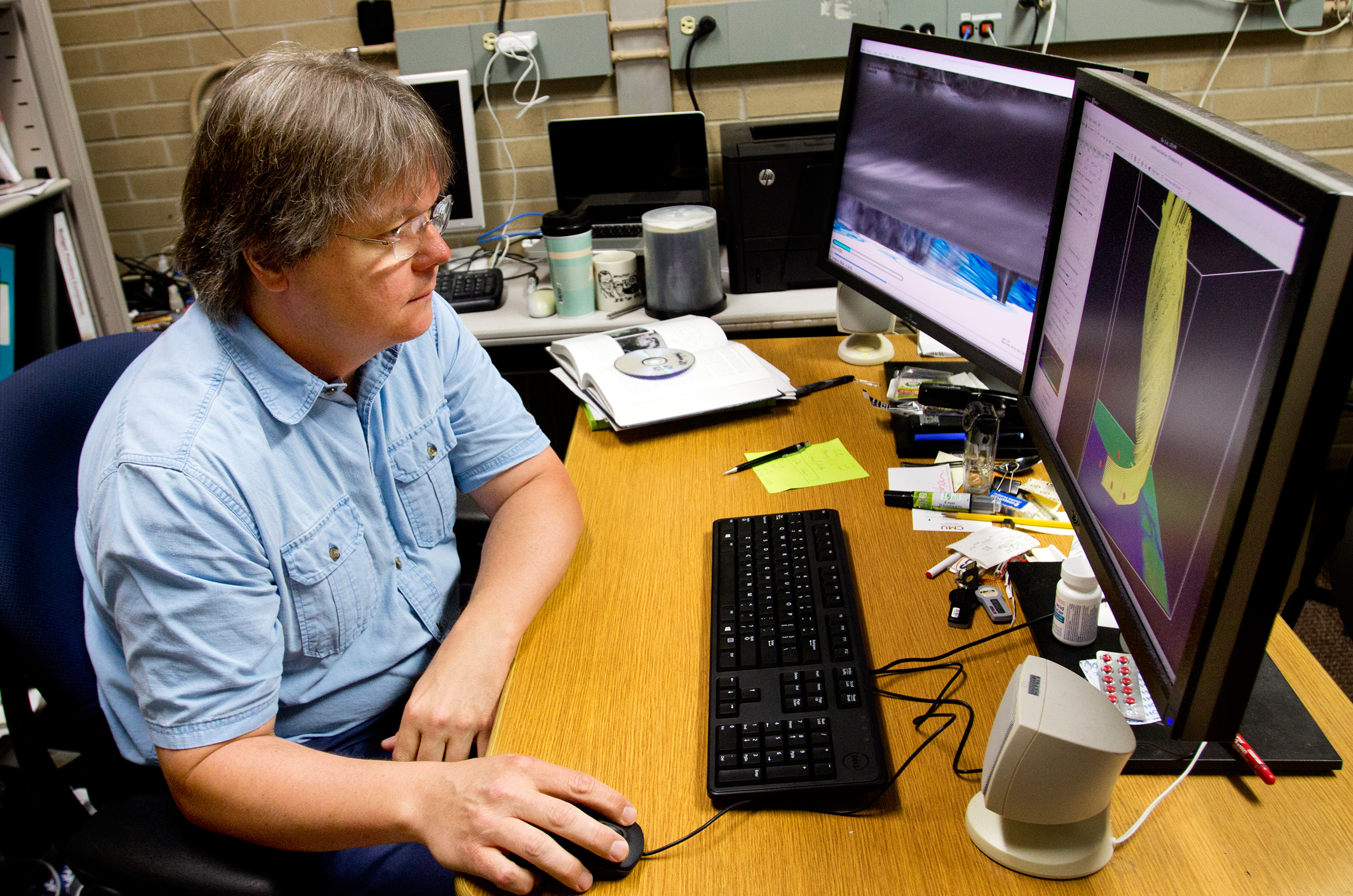 Orf is part of a research team studying supercells and tornadoes. The team includes Robert Wilhelmson from the National Center for Supercomputing Applications at the University of Illinois at Urbana-Champaign , Louis Wicker from the National Severe Storms Laboratory in Norman, Okla., and Bruce Lee and Catherine Finley of Windlogics, a wind energy and weather consulting firm based in St. Paul, Minn.

The monster storm visualization was presented at the 27th Conference on Severe Local Storms in Madison, Wis., earlier this month.

Tornadoes are compact, powerful whirlwinds produced by differences in wind, moisture and temperature. Rated zero through five in intensity on the Enhanced Fujita Scale, or EF scale for short, EF5 tornadoes are rare. Long-track EF5 tornadoes do damage for dozens of miles and account for less than a fraction of 1 percent of all tornadoes. They are the longest-lived and most violent, packing wind speeds of more than 200 miles per hour.

Orf’s simulated storm produces a tornado with winds exceeding 300 miles per hour near the ground. The storm, which remains on the ground for 65 miles, was ‘grown’ in the same environment as that of a storm that produced a long-track EF5 tornado in Oklahoma on May 24, 2011.

Determining which storms will generate monster tornadoes, or any tornadoes at all, remains a challenge for weather forecasters, who know that better prediction will give people more time to seek shelter when a tornado is bearing down. According to the U.S. National Oceanic and Atmospheric Administration, the current average lead time for tornado warnings is 13 minutes.

“The overarching goal of this line of research is to help meteorologists better understand the mechanics of these types of devastating storms in order to ultimately get people out of their way in a more effective manner than we are able to do today,” Orf said.

Orf used Blue Waters, one of the most powerful supercomputers in the world and the fastest supercomputer on a university campus, located at the University of Illinois at Urbana-Champaign, to create the simulation.

It took 100 terabytes of data created with the Cloud Model 1 developed by George Bryan at the National Center for Atmospheric Research — that others, including Orf, enhanced — to create visualizations with Vapor and VisIt software in such a way that comparisons could be made to similar storms observed in the field.

When the researchers examined the inner structure of the simulated thunderstorm they discovered storm-generated cooled air — created primarily by the evaporation of rain recycled back into the storm — that had never been seen in previous simulations. This recycling may help explain why some supercell thunderstorms spawn massive, devastating tornadoes.

“It’s as if the storm generated energy from its own exhaust,” Orf said. “These types of simulations are extremely complex and difficult to execute, and when they’re attempted you never know what result you’ll wind up with. A majority of the time you don’t even get a tornado and if you do, it’s a weak one — just like in the real atmosphere. What makes our simulation especially compelling is that the simulation bears interesting similarities to an actual storm that was observed, including tornado track length, direction, intensity and evolution, owing more credence to our result.”

“To the best of our knowledge, this is the first time a supercell producing a long-track EF5 tornado has ever been simulated,” Orf said.