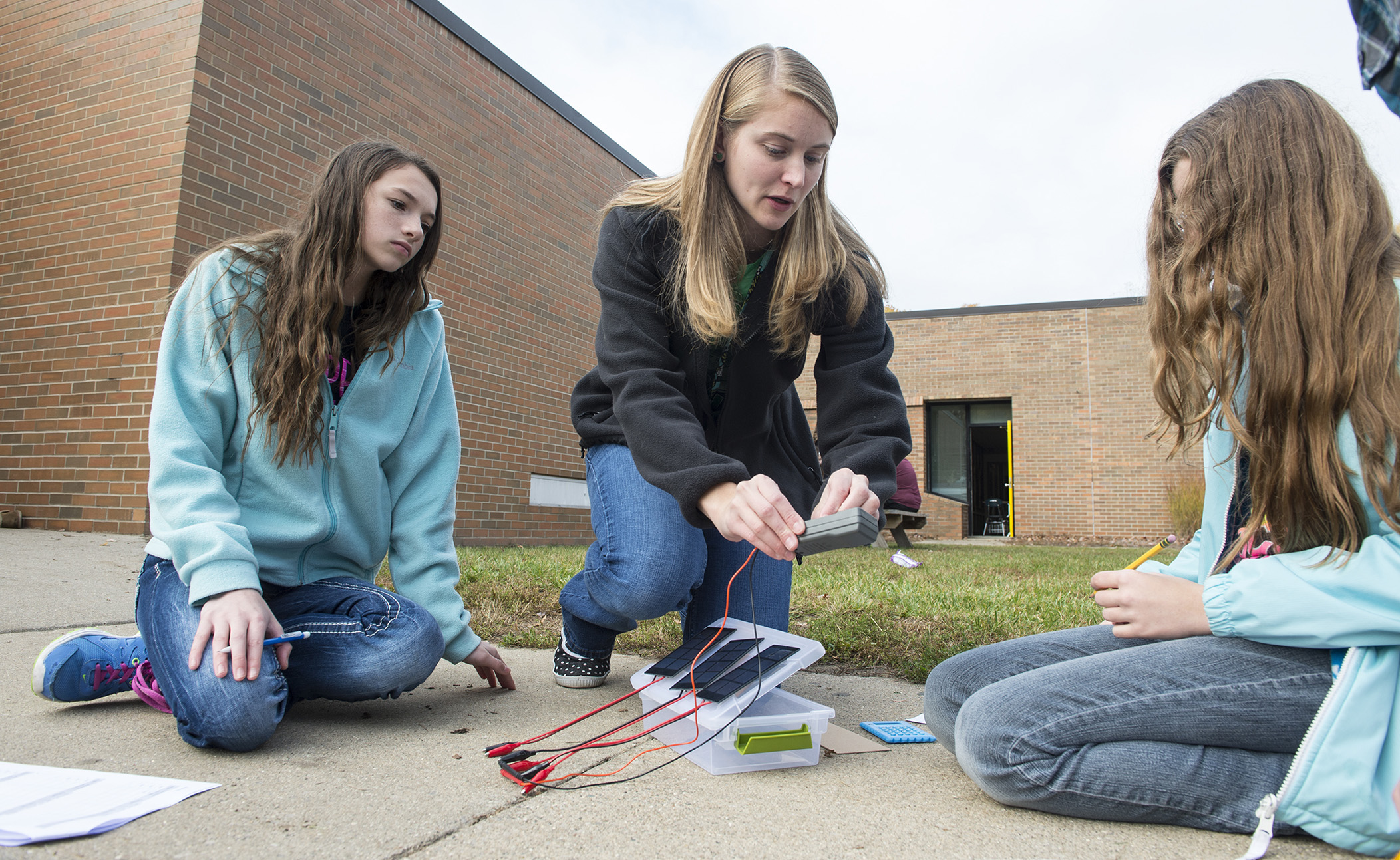 While that task is the machine’s literal purpose, the technology serves a symbolic function as well. Education advocates hope the device is one of several metaphoric instruments that power these students’ pursuit of careers in science, technology, engineering and mathematics fields.

Their teacher, Ashley Meyer, is one of those education advocates, as are the individuals who selected her to participate in the Dow Corning Foundation-Saginaw Valley State University STEM Community Partnership. As part of the initiative, Meyer and 12 other teachers from across the Great Lakes Bay Region are receiving academic assistance and funding to support STEM-related studies such as the environmental project underway at Bullock Creek Middle School.

The goal is to pique K-12 student interest in the sciences in hopes those pupils one day will fill the state’s growing STEM-related jobs pool.

“I want to change their attitudes toward math,” Meyer said of her students. “Hopefully, it works.”

The STEM partnership has teamed her with Garry Johns, SVSU professor of mathematics. Over the next year, they will continue to generate study plans – such as the experiment involving the weather station – meant to resonate with young students.

The 42 students in Meyer’s fourth- and sixth-hour pre-algebra classrooms are among the inaugural class exposed to the STEM project. Their first assignment is to answer the question: Which alternative energy source would best suit Bullock Creek Middle School?

The assignment links mathematics to science — two subjects students rarely see as related, Meyer said. Over the course of the academic year, students will measure energy outputs from devices relating to both solar- and wind-produced power. Meyer already has collected data on energy use at the school, located just a few miles south of Midland.

Said Meyer: “We’re asking, ‘Should we go and get a solar panel? Should we invest in a wind turbine? Should we stick with the electricity we use right now?’”

A $254,000 Dow Corning Foundation grant is funding the technology supporting the classroom projects for Meyer and her 12 peers involved in the partnership.

For Meyer’s project, that funding so far has supported both the small weather station and small, handheld solar panels. The data gathered from the technology will aid in the class research.

Meyer, a 2013 SVSU mathematics education graduate, said she is considering asking her students to present their findings to the Bullock Creek school board at the end of the academic year.

The work also is intended to connect to the new common core standards for eighth grade math, as adopted by the Michigan State Board of Education in 2010.

While the students only recently began their research, some already are excited by its prospects. The group recently spent a classroom hour on their school’s front lawn. There, they set up the small solar panels, adjusted them at various angles and recorded the sun’s energy measurements as provided by calculator-like devices attached to the panels.

“It’s much more fun to do this than to read about it in books,” the eighth grader said. “This is a good idea to help us understand how this connects to the real world.”

“I’ll remember this better than books,” she said.

Meyer said she hopes such sentiments are shared by all of the participating students by year’s end – and beyond. She plans to continue the project in future eighth grade classrooms while also adapting the project to fit the curriculum of other grade levels.

“I also have a sixth and seventh grade math class, and when they saw the solar kit sitting in the side of the class, they would ask, ‘Oh, are those for us?’ I had to say, ‘No, those are for my eighth graders.’ So they’re excited and they’re hoping they have me next year so they can do this,” Meyer said.