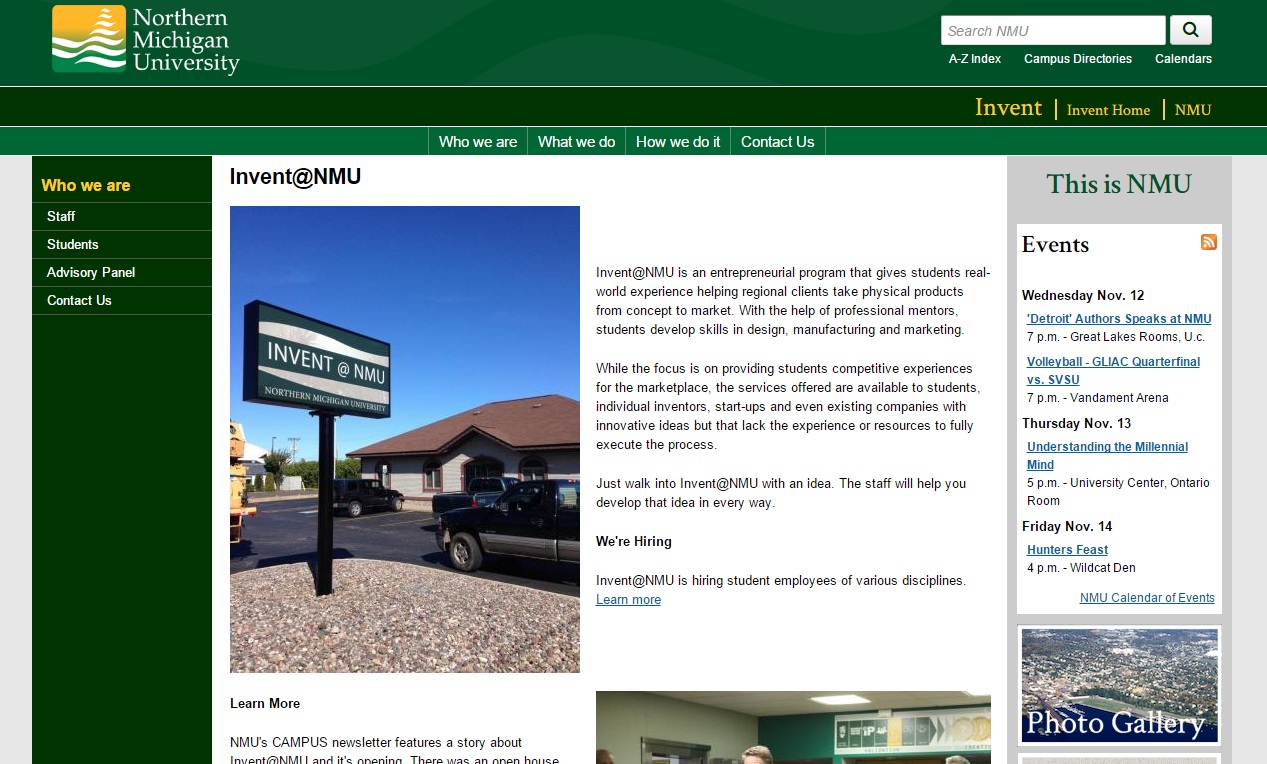 Instead, Ollila has signed on as founding director of Invent@NMU, a new innovation and entrepreneurial center launched by Northern Michigan University in Marquette.

The aim of Invent@NMU is to give students real-world experience helping regional clients take physical products from concept to market. Under the guidance of professional mentors, students will develop skills related to design, manufacturing and marketing.

Ollila said the center will “concentrate on products that are made — physical products — not apps, not software, not services — products that can be made in the UP, and projects that would take less than $100,000 and less than a year to get from napkin to market.”

Ollila said the project grew out of his experiences as an entrepreneur.

“This is essentially part of the model that I’ve been working on, of creating a platform that alleviates the innovator of the entrepreneurial burden,” Ollila said. “When I realized there was an opportunity to train NMU students on the process of value creation, it became time to introduce this idea to the university. NMU has all of the resources needed to bring a physical product to creation, from the college of business to the industrial arts to human centered design — we had all these nodes of value creation, but they were disconnected. So essentially we’re connecting the dots of resources that already existed here.”

Agreed NMU president Fritz Erickson: “This is an opportunity to play to the strengths of NMU. The university offers a wide range of degree programs in the disciplines involved in creating hardware products and getting them to market. Tying together these resources and complementing our diverse curriculum with real-world experiences will provide a clear competitive advantage to our students as they enter the workforce.”

Ollila said Invent@NMU was “lucky enough to find a fantastic facility literally across the street from campus” — a former mBank building at 1400 Presque Isle Ave., “where we have about 5,000 square feet of office space and a little bit of maker space as well.”

Now working at Invent@NMU are four students, with 20-hour-a-week part time jobs, who have different skills, Ollila said — one in accounting and business management, another in project management, another in mechanical engineering technology, and the fourth in human-centered design and industrial design. The center also has “about 10 other openings posted around campus. We’re looking for skills in social media marketing, sales, writing, all of the other services involved in product development and project launch. Those will be part-time or project-based positions.”

Added Ollila: “Our focus is on smaller ideas that typically wouldn’t receive assistance moving through the process otherwise. We’re not interested in owning the intellectual property of the inventor. We’re providing an affordable channel for people to make an informed decision about whether to move forward based on factual data and qualified feedback.”

Ollila is an outdoor enthusiast who in 1999 founded Viosport as an early video-sharing service targeted at extreme-sports athletes (it actually predated YouTube). In 2002, it started selling repurposed security cameras as helmet cameras for mountain bikers and skiers. Ollila left what became known as VIO in 2009. After that, he invented a backcountry ski.

An individual can walk into Invent@NMU with only an idea; a business plan is not required. For a flat fee of $75 for students and $150 for the public, the staff will help to complete the initial validation phase. That phase will give the potential inventor or entrepreneur results of a survey on such factors as target audience and lifetime revenue potential; the score the idea received from an
advisory panel composed primarily of NMU faculty and academic department heads; and an intellectual property report that details comparable products, if they exist, as well as pricing.

Those who elect to proceed to the ideation stage and beyond
(commercialization, production and ultimately operations) will pay an hourly fee of $20 for students and $30 for the public.

“Invent@NMU is not duplicating what other entities are doing related to economic development,” said Robert Eslinger, special assistant to the NMU president for economic development and director of the Center for Innovation and Industrial Technology. “The university’s goals are to enhance the student experience, increase enrollment, graduation rates and job placement, then boost the regional economy. It may serve as an occasional feeder to a Smart Zone or other incubator, but our measure of success isn’t job creation; it’s how much students are learning. The hope is that this program will also help to reduce the export of youthful talent from the Upper Peninsula.”

Eslinger said advancements in 3D printing, flexible manufacturing and access to global markets are changing the way companies are formed and products are made. The Invent@NMU building is equipped with a 3D printer, appropriately named Napkin to reflect the fact many ideas are first jotted on the back of one. It also features a conference room with videoconferencing capability, large
monitors that can project computer content and a lower-level workshop for tinkering and developing prototypes and “hobotypes” (inexpensive mockups using readily available materials).

While the students working at Invent@NMU will not earn academic credit, they will be paid as employees and gain valuable knowledge in how to effectively support product development and operations.

“It’s a great opportunity to apply what I’m learning in the classroom and to get experience working in my field before I leave college,” said Rachel Griep, a mechanical engineering major and Invent@NMU student employee. “This is considered a job, not an internship, so it gives me a foot in the door to a mechanical engineering career. I’ll be able to show how I’ve helped a product make it to market and the connections I make along the way will be very valuable.”

NMU students contributed to the building’s interior renovation. The NMU Constructors helped to transform the former bank teller windows into a flat countertop in front of the four student workstations. An art and design student created an infographic that spans the front wall above the former drive-in window and illustrates the entire process, from ideation to operations. Other students’ product designs hang on the walls. For added inspiration, there is even a historical photo in the lobby showing four prominent inventors with Michigan ties: Harvey Firestone, Henry Ford, Thomas Edison and Ed Kingsford.