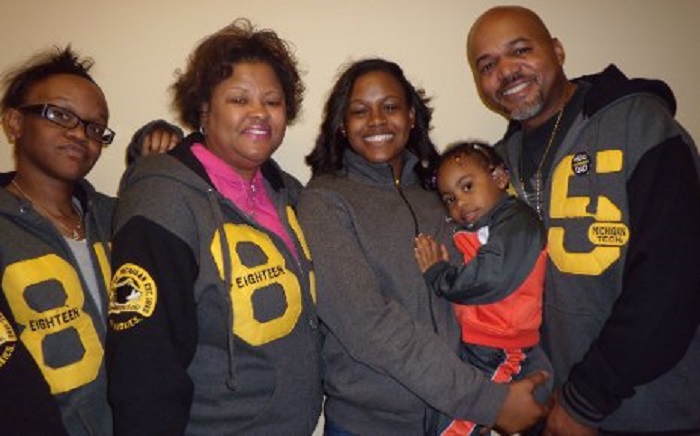 HOUGHTON — Rebecca Spencer loves to do things with her hands. And the Detroit native does them so well that those talented hands — with a mind to match — earned her a scholarship to Michigan Tech from Marathon Petroleum Co. LP.

But it’s more than a scholarship. It’s a scholarship that comes with four summers of paid internships and co-ops at Marathon — and an opportunity for a job with the refining company when she graduates.

An engineering education program called DAPCEP (Detroit Area Pre-College Engineering Program) launched Spencer on her journey toward Michigan Tech, Marathon and an engineering career. She joined DAPCEP before she could even spell “engineer,”at the prompting of her mother, Chiquita Spencer, who heard about the program from Rebecca’s godmother.

DAPCEP is a nonprofit educational organization that partners with eight Michigan universities to bring science, technology, engineering and mathematics experiences to underrepresented youth in metro Detroit. Michigan Tech is one of DAPCEP’s university partners.

“I’m not a big fan of science, but I like math, and I really like doing things hands-on,” Spencer said. “I’m definitely a hands-on kind of person.“

So she and other PURSE members worked on things with their hands, things like wind turbines and models of solar energy. They even built a model house that uses solar energy. She won science fair competitions and earned the chance to come to Michigan Tech for two weeks one summer and three weeks the next.

Spencer not only enjoyed her time in DAPCEP, she says it helped her in school.

“School became like a refresher course, because I’d already learned all that in DAPCEP,” she said.

During her senior year of high school, Rebecca took a tour of Marathon’s Michigan Refining Division plant in Detroit, hosted by DAPCEP and Marathon. She learned about their new scholarship for a deserving high school student living in Detroit. She liked what she’d seen at the refinery, so she applied.

After writing essays and going through a comprehensive interview process, Rebecca won the scholarship. She spent last summer working an internship at the refinery, and Marathon was impressed with her performance.

Rebecca calls her mother the driving force behind her early explorations in engineering and her drive to win the scholarship.

“She was on top of me all the way,” the first-year engineering student said.

Her mother was also her inspiration, as was her grandmother. While Rebecca was in high school, her mother developed breast cancer within two weeks of the girl’s grandmother being diagnosed with colon cancer.

“Imagine the impact this had on me, the two most powerful women in my life in a battle to survive this deadly disease,” she said.

Rebecca found balancing schoolwork, after-school activities and supporting her mother and grandmother in their fight against cancer almost overwhelming. “Even staying awake in class was a challenge,” she said. Still, she managed to maintain a 4.0 grade point average, remain on the honor roll and earn a scholar-athlete award for her achievements in varsity basketball, varsity track and as a varsity cheerleader.

Rebecca’s mother is now a breast cancer survivor — and proud of her daughter, who started at Michigan Tech this fall.

“She strives so hard, and she always stays focused,” Mrs. Spencer saod.

“Whenever I find myself in a tough situation, I think about the words my grandmother would always say to me: ‘Stay in school, be somebody in life and make me proud,’ “ Rebecca said.

With MPC’s and DAPCEP’s help, that’s just what she is doing.