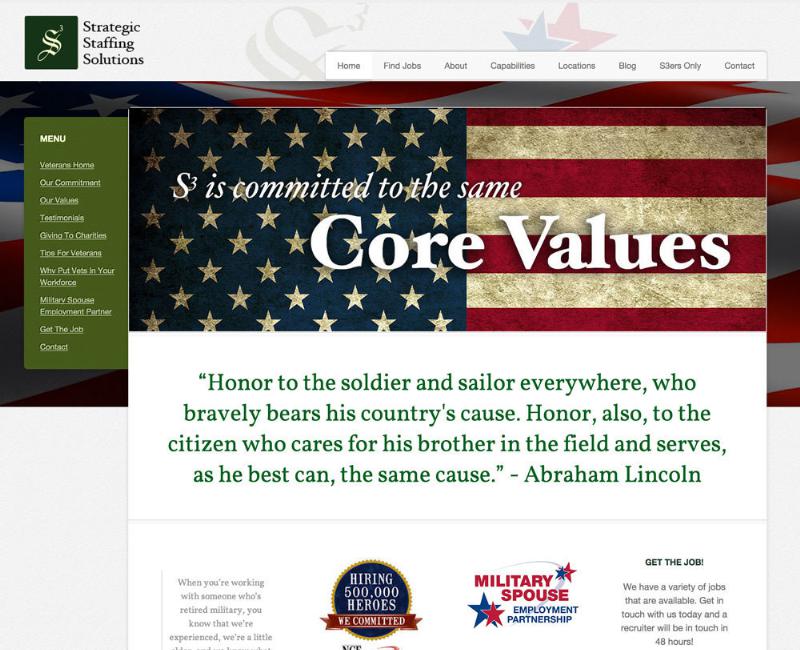 DETROIT — The Detroit IT and business services provider Strategic Staffing Solutions on Veterans Day launched a new website to support the company’s efforts to employ military veterans and their spouses.

Cynthia J. Pasky, S3 president and CEO, said the company’s veteran employment program has already resulted in S3 hiring more veterans and their spouses in 2014 than ever.

“Our dedicated military sourcing team has already placed 350 consultants with customers generating roughly $80 million just this year,” said Pasky. “The military veterans at S3 are exemplary of who hard work, dedication, and who we are as Americans. They are solution centered and know how to meet the needs of our customers. We believe this new dedicated web page will help us to accelerate those efforts. Our military recruitment program is the perfect union of our pride in our country and our support for our communities. We are helping serve the employment needs of those who served to protect our freedoms.”

The S3 Military Veterans & Spouse Employment page, at http://veterans.strategicstaff.com, offers resources for veterans, spouses and dependents, including advice on translating military experience into desired civilian job skills, a database of current job opportunities in S3 and help writing a resume.

The page also features testimonials from current S3 team members who have successfully made the transition from the armed forces to the civilian job market through S3.

“When you’re retiring from the military or separating after your initial service obligation, transitioning from the Armed Forces to ‘corporate America’ can be a daunting challenge,” said Ken Huxley, S3’s Southwest branch manager, who is also a U.S. Air Force veteran and helps manage this program. “We know that veterans are uniquely equipped to transfer their skill sets into different industries, and with our nationwide presence, S3 is well-positioned to offer resources and support to the military community across the country.”

Marvin Daugherty, another Air Force veteran and one of the original members of S3’s veteran employment program, said: “When we look at veterans’ resumes, we know what we’re looking at — acronyms, titles, technical terms — and these are indicators of skill sets that we can translate into civilian job skills. S3 doesn’t just talk about finding vets a job, we’ve done it. I see it every day, and that’s exactly what I signed up for.”

In addition to S3’s dedication to supporting military veterans and their families, the recruitment program also aligns with the needs and values of the Fortune 500 and 100 customers the company serves. The program demonstrates the company’s commitment to on-shore solutions, as well as fulfilling S3 customers’ diversity spend by adding qualified veterans to their workforce. The veteran employment program began as a pilot project in April 2013, created by Huxley and S3 executive vice president, April Donaldson.

In addition to launching the website, S3 has made a commitment to the U.S. Chamber of Commerce Foundation’s “Hiring 500,000 Heroes” program, an initiative to work with businesses across the country to make commitments to hire 500,000 veterans and military spouses by the end of 2014.

“At S3, we know and appreciate the service and sacrifices made by those who stay behind while supporting those called to serve,” said Huxley. “In fact, 5 percent of our more than 2,700 employees and consultants have self-identified as a military spouse. We’ve been recognized not only as a Military Spouse Employment Partnership partner by the Department of Defense, but also as a Military Spouse Friendly Employer by GI Jobs magazine.”

S3 had $238 million in revenue in 2013 and was ranked the sixth largest diversity staffing firm in the United States by Staffing Industry Analysts and 16th among the largest staffing firms in the U.S. by Staffing Industry Report. It is also one of five companies nationally that is a certified Charter Partner with Staffing Industry Analysts. S3 provides IT consulting, customized project sservices, vendor management programs and an executive search service to financial institutions, energy companies, the oil industry, telecommunications, government agencies and retail and health care employers worldwide. It has more than 2,700 consultants and 31 offices in the U.S. and Europe.