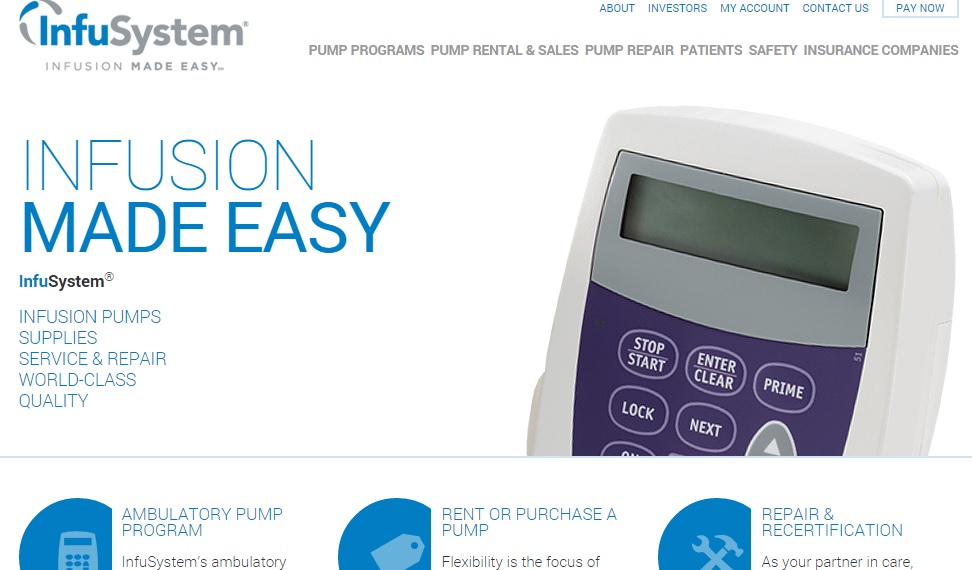 MADISON HEIGHTS — InfuSystem Holdings Inc. (NYSE:INFU), a provider of infusion pumps and related services for the healthcare industry in the United States and Canada, reported third quarter net income of $852,000 or 4 cents a share, up from $649,000 or 3 cents a share a year earlier.

“The successful implementation of our IT strategy transforms the way we do business and establishes new market opportunities for our services,” stated Eric K. Steen, CEO. “We continue to grow in all
business areas: rentals, equipment sales and service, and sales of
disposable products. We have also made significant investments in
our pump fleet in the first nine months of the year of $3.7 million that positions us well for future growth.”

“We now have 25 oncology infusion centers with full electronic
medical records connectivity,” Steen said. “We now receive 40
percent of our orders electronically through our paperless iPad
ordering system. Our Pump Web Portal helps our customers manage the care and life-cycle of their pumps far more efficiently. And our Block Pain Dashboard helps an increasing number of post-surgical pain-patients record information on Pain scores that can trend and be shared with clinicians to help future patients.”

Steen added: “The most encouraging aspect of our third quarter
performance is the continued high patient-satisfaction scores we are earning and what this means to our future. In the Affordable Care Act environment, patients will be at the top of the payment pyramid, and these scores will increasingly dictate actual payments.”

For the quarter, general and administrative expenses were $4.9
million compared to $4.6 million for the same prior year period. The
increase was mainly attributed to increases in spending on
Information Technology and Pain Management initiatives of $200,000; charge-off of pumps of $100,000 and increases in compensation and headcount of $500,000, offset by savings of $400,000 million in professional fees. The company has brought professional services in-house previously performed by outside advisors, including tax, legal, information technology and internal audit. G&A expenses rose slightly from 29 to 30 percent of revenue for the third quarter of 2014 compared to the same period in the prior year.

Net cash provided by operations for the nine months ended Sept. 30
was $4.2 million, down from $4.8 million for the prior year period. The decrease in cash provided is primarily due to changes in accounts payable and other accruals.

The company said it continues to expect a high-single-digit revenue
increase through 2015.

To listen to a replay of the conference call discussing these results,
visit www.infusystem.com.