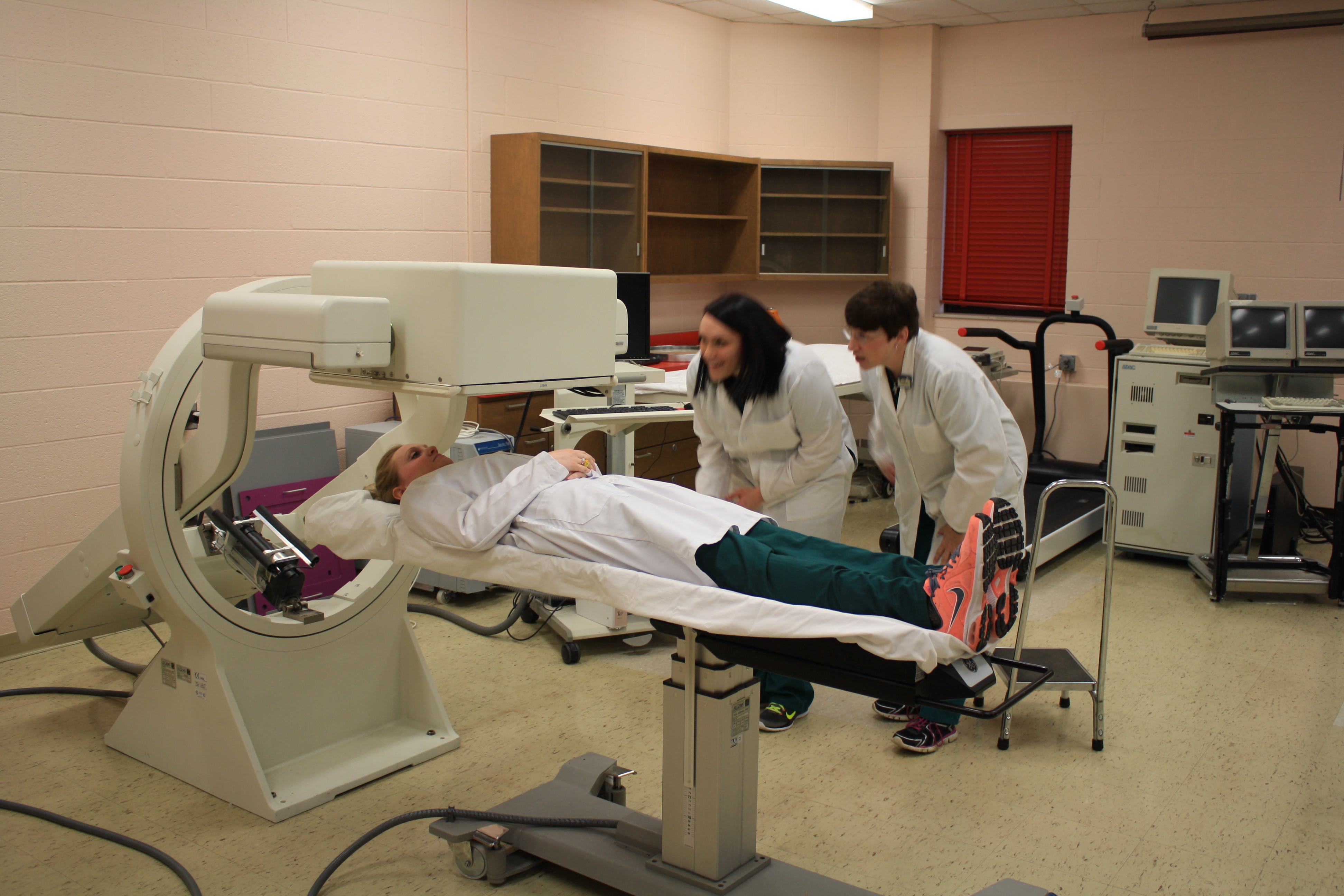 That’s a message I got reinforced over and over again during
Tuesday’s ESD Tech Tour stop at Ferris State University.

Oh, sure, Ferris — founded in 1884 as the Big Rapids Industrial
School — has big programs in hard-core engineering and trade skills
like plastics engineering technology and rubber engineering
technology. And it’s got a whole building dedicated to the building
trades — where you can get, among a lot of other things, a bachelor’s
degree in heating, ventilation, air conditioning and refrigeration.

But Ferris has also spent more than 50 years training health care
workers, including a nursing program that dates back to the 1960s,
and what is now the College of Health Professions building, which went up in 1979 and maintains some of the most advanced equipment in the industry.

I spent a fun morning at Ferris, put together by Sandy Gholston, the
university’s terrific news services and social media manager. It began with coffee with Matthew Adeyanju, dean of the College of Health Professions, and its associate dean, Julie Coon.

In general, they said, Ferris is moving toward more programs at the
bachelor’s and master’s degree level — and eventually, the doctoral
level, “because of the increasing complexity of health care,” Coon
said. “We’re shifting from a technical to a professional focus in health care, in part to differentiate ourselves from the community colleges, which are doing a fine job, and because the work force is asking for a better-educated worker.” When it comes to nursing, Coon said, “most workplaces want nurses to go on and get the bachelor’s degree.”

And then there’s Ferris State’s pharmacy program, which dates back
to the 1890s and is the oldest program the university offers, and its
College of Optometry, the only one in Michigan.

Coon said all three colleges are increasingly collaborating in what she called “interprofessional education and practice — students learning with and from each other. It takes a lot of effort to make that happen. There wasn’t a lot of communication between these disciplines before — they were kind of working in silos.”

Adeyanju put it in perspective: “The layman’s term is teamwork.”
Examples include nursing students learning how to do an oral health
assessment from dental hygiene students, or diabetic patients getting nutrition information from nurses, information on their medications from pharmacists, and eye exams from optometry students.

Coon said Ferris could add more enrollment in clinical programs but
is limited because of the limited number of clinical placements in the
area — there are only so many medical offices willing to take students to gain their first professional experience.

Adeyanju said Ferris is considering setting up a “comprehensive rural health center” to solve that problem, noting that it would also solve the problem of the Big Rapids area being underserved in terms of available medical care close by.

Ferris’ STEM outreach to K-12 students includes regular campus
tours and relationships with area career-tech centers. Coon said that among high school students, there are plenty of people interested in nursing — but fewer realize there are also great opportunities for careers in related fields like medical lab services or nuclear medicine technology.

“They’re more behind the scenes and lesser-known — but they’re so
much in demand and so critical to making the health system work,”
Coon said.

Adeyanju, a native of Nigeria, is in his third year at Ferris, with a
background that includes stints at Ohio University and the University of Kansas.

“Health care services administration, public health, health care
management, health care information systems — those are all on the
preventative side of health care, and we have little of that here, and
we’re trying to build it,” he said. “You cannot eliminate one side from
the other.”

Coon, meanwhile, has spent her whole academic career at the school after a brief stint at Kirtland Community College.

The rest of my time at Ferris was spent in a series of tours of the
various programs in the health professions building, starting with
Margaret “Sue” Waters, assistant professor and program
coordinator of the respiratory care program. I watched a group of
about 10 students learning everything from how to give asthma
treatments to how to intubate patients struggling to breathe in an emergency to how to help cystic fibrosis patients eliminate their thick lung fluids to how to draw blood.

Walters said respiratory care workers are everyplace in healthcare,
from intensive care units to operating rooms to the emergency room.

A floor away, Dan deRegnier was teaching a classroom
of clinical laboratory science students how to culture urine samples.
Ferris offers two programs — associate’s and bachelor’s degree, both of which include an internship. The graduates wind up everywhere from labs to hospitals to blood banks.

Elsewhere in the building were students learning how to conduct
ultrasound examinations, under the watchful eye of Michelle Weemaes, assistant professor, and take X-rays, led by Michelle “Mickey” Mills, a laboratory assistant with amazing enthusiasm. And then, down in the basement, came my favorite of the day, nuclear medicine.

“I call it a reverse X-ray,” said Sheila MacEachron, associate
professor. “In an X-ray, beams shoot through you and produce a
picture. With these cameras, we give patients a very small amount of
a radioactive substance, either in a gas or an injection, and we take
pictures of them with a camera that is sensitive to the radioactivity.
And that gives us much more than a static X-ray picture. We can take videos of hearts pumping and bones moving.”

The stuff they use? Mostly, Technetium-99m, a very low-energy radioactive isotope with a very short half-life, just about long enough for a test. The total radioactive dose? About what you’d get lying out in the sun on a beach for a couple of days.

Ferris has had a nuclear medicine program since 1974, and offers
instruction to students in both Big Rapids and Grand Rapids. The
program’s interns go to hospitals all over Michigan, from Detroit to
Marquette.

MacEachron is fiercely proud of her program, saying Ferris is one of
the few schools in the country that has all the medical hardware
students will use on the job in a university setting — no need to go to a hospital and try to get in a moment between patients to try it out.

So ended my morning at the home of the Bulldogs, Ferris State
(which just knocked off previously undefeated Michigan Tech in
football, by the way). Once again, this was a great visit to a hard-core
tech school that’s virtually unknown as a science and engineering
powerhouse in the Detroit area. Well, consider that changed, just a
bit.

Oh, and for those of you interested in more information on summer
STEM camps at Ferris, here’s that.

As for me? I’m off to Grand Rapids tomorrow for meetings on STEM
outreach at Grand Valley State University, the explosively growing
West Michigan school. Looking forward to meeting some Lakers!