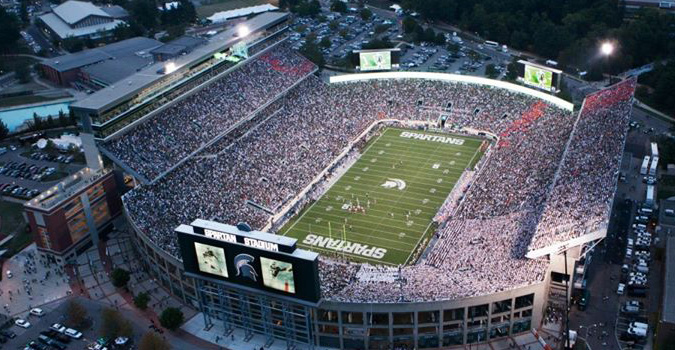 EAST LANSING — When a big play happens this season at Michigan State University’s Spartan Stadium, football fans can expect faster service as they pull out their wireless devices to share exciting moments with friends and family.

AT&T Inc. says it has expanded its mobile Internet coverage at
Spartan Stadium by completing the installation of a new Distributed
Antenna System to enhance mobile internet speeds throughout the
stadium area.

The MSU DAS installation is part of AT&T’s Project Velocity IP, a
multi-year plan for mobile web upgrades announced in 2012. As part of Project VIP, AT&T is deploying small cell technology, macro cells and additional DAS, which will increase the density of our wireless network. The wireless network densification will further improve network quality and increase spectrum efficiency.

“When our customers head out to the stadium to cheer on their
favorite team, we want them to have a great network experience
throughout the game no matter what they’re doing – whether that’s
making a call, checking email, downloading apps or surfing the
Internet,” said Jim Murray, president of AT&T Michigan. “With
initiatives like Project VIP, we’re continuing our investment in the
wireless network, and providing enhanced wireless coverage at
Michigan State University is just one way that we’re investing in East Lansing.”

For more on AT&T’s 4G LTE network, visit the coverage viewer at
www.att.com/maps/es/wireless-coverage.html.