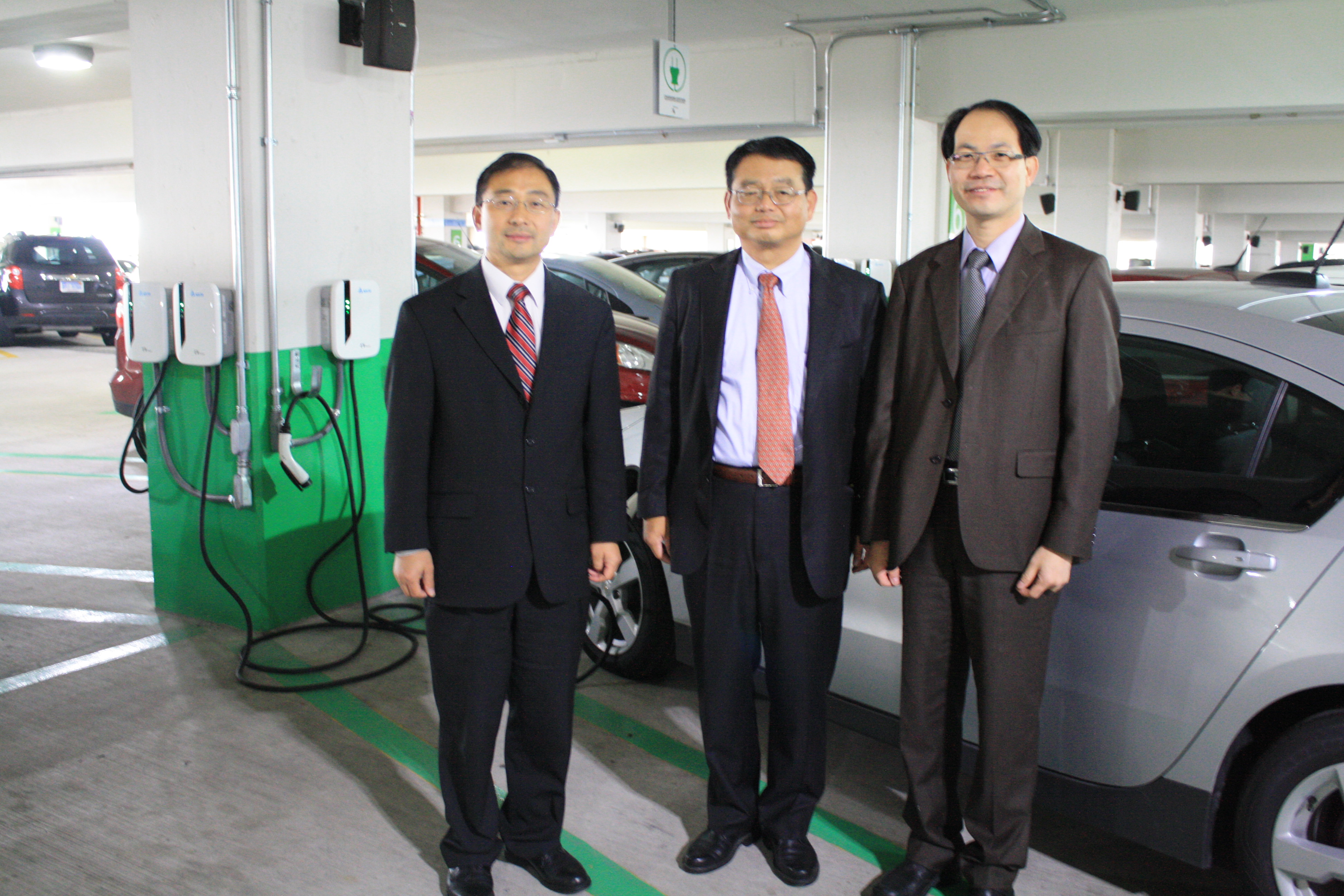 DETROIT — The headquarters of the Detroit utility DTE Energy and the MGM Grand Casino already share a parking ramp that spans the two landmarks on the western edge of downtown Detroit.

DTE and MGM Wednesday unveiled a set of 24 electric and plug-in hybrid vehicle charging stations on the sixth floor of the parking ramp. While they’re intended for use by DTE employees who drive plug-ins, if they should happen to be available, casino guests with EVs and PHEVs are welcome to use them at any time.

The charging stations are built by Taiwan-based Delta Group, which has an office with 20 engineering employees in Livonia as part of its California-based U.S. subsidiary, Delta Products Corp.

Delta Products received a $2 million grant from the U.S. Department of Energy in 2012 for a research project to develop smart, cost-effective residential electric vehicle chargers, a three-year effort to encourage deployment of charging infrastructure for PHEVs. Delta teamed up with DTE and Mercedes-Benz on the MGM parking ramp project.

The charging stations feature wireless communications that links them to both the power grid and the Internet, according to Charles Zhu, Delta Products’ automotive director and head of the Livonia office. The Zigbee wireless protocol talks to the power grid, while WiFi talks to workplaces and smartphones.

Zhu and Haukur “Hawk” Asgeirsson, engineering manager for power systems and technology at DTE, said the charging stations can be controlled by their owner — in this case, DTE — to vary the amount of charge they put into a car over time, based on cost, power capacity or other considerations.

For instance, in the early morning, when DTE needs a lot of power quickly as Michigan wakes up, the charging stations can be turned down so as not to overload DTE’s capacity. Ditto for a hot summer afternoon. But at night, when demand is low, the chargers can be cranked up full blast. These capabilities become even more important in a smart-grid future, when utilities begin charging more for power used at peak demand times, and less for power used at low-demand times. Eventually, EV owners will be able to manage their recharging based on cost and driving needs.

Apps to be made available to DTE’s EV and PHEV owners also tell a car owner when their car is fully charged and ready to go, Asgeirsson said.

The charging stations being used in the MGM Grand garage are Delta Products’ second-generation models, which will start at $450 retail when they go on sale to the public early next year, Zhu said. That’s far less than the $2,500 estimated cost of a home EV charging station only a few years ago.

The Delta Products stations will come in two models — hard-wired, which requires professional installation by an electrician, and a plug-in model that requires only a 220-volt outlet — like that used by an electric stove or a clothes dryer — in the user’s garage or on the outside of their home in a spot accessible from a driveway.

Delta Group was founded in 1971 in by Bruce C.H. Cheng as a manufacturer of electronic components. Today, it has businesses in power electronics and power management systems, including uninterruptible power supply equipment for telecommunications and wind power, and power electronics for the auto industry,  industrial automation, display systems and data networks. It began U.S. operations in 1983.