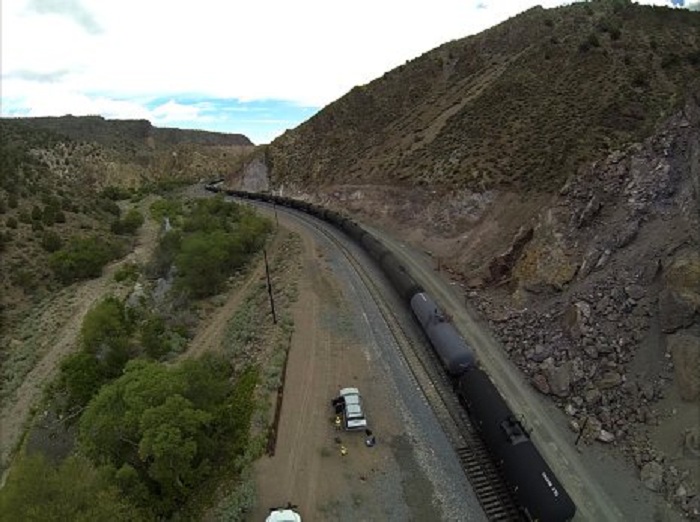 HOUGHTON — While we’re able to enjoy timeless scenery as we travel in the United States, it’s important to realize that the soils and rocks forming the base of these transportation systems may not forever be stable.

In a new project led by Michigan Technological University, Thomas Oommen, assistant professor of geological and mining engineering and sciences, heads a team that is using advanced technology to develop a comprehensive management system to monitor our nation’s geotechnical assets — the ground that forms the base for the concrete, asphalt or steel that makes up our transportation system.

The one common theme for the transportation infrastructure across the United States is that it is supported by the ground, constructed over it, through it or next to it. Scientists call these natural bases geotechnical assets. The problem, however, is that we do not have a comprehensive program in the U.S. to monitor the geotechnical assets of our transportation corridors. That is, until now.

“There are so many geotechnical assets in road, rail and pipeline transportation systems,” Oommen said. “And the first question people ask is why there is no comprehensive monitoring of these assets. It is because the scale of the task is huge!”

The team has worked in a variety of locations, from Detroit’s highways to western railways to Alaskan pipelines. To date, studies have taken place in Michigan, Nevada and Alaska.

With changing weather, increased traffic and aging infrastructure, more failures are bound to occur. Oommen’s team has been monitoring steep slopes along railroad grades, where rockfalls are an immense hazard. These routes cover thousands of miles, and the cost of monitoring these assets means that issues are mainly ignored unless they are serious.

With a new suite of technological tools, however, monitoring can be much more targeted, resulting in the prevention of problems before they occur and at a significantly lower cost.

“We can use a variety of remote-sensing techniques, from Optical Photogrammetry to LiDAR (a combination of light and radar using lasers) to Interferometric Synthetic Aperture Radar,” he said. “Our project is determining which of these techniques is best and most economically sustainable for monitoring geotechnical assets for transportation.”

Economic sustainability is a major factor; corporations looking at the bottom line and governments facing budget scrutiny cannot afford massive capital outlays. Working alongside Union Pacific, Alyeska Pipeline Co., and the Michigan and Alaska Departments of Transportation, the team is mindful of finding affordable solutions to this massive challenge.

“These techniques, some of them can work well with just a typical digital single lens reflex camera,” Oommen said. “Comparing that to the expense and time involved with LiDAR and OP makes a great deal of sense.”

Using OP, Oommen’s team has been able to detect slight movements in small-scale structures in the lab using a standard digital camera. The structure is photographed from different angles, and then made into a 3D model using sophisticated software. This provides a great deal of accuracy at a relatively low cost.

“State agencies are doing asset inventories and they see the scale of the problem,” Oommen said. “But it’s a challenge to decide what to do about it.”

A test site for adopting OP techniques has been a 10-mile-long series of retaining walls on a Detroit-area highway. The team monitored these walls through a variety of weather conditions, including winter melt and heavy rains. After one particularly strong storm, they noted a couple of inches of movement. As a result, the retaining wall was able to be rebuilt before it failed.

“Our goal is to fundamentally transform geotechnical asset management to be more proactive and cost-effective,” said Daniel Cerminaro, a graduate student who has been instrumental in fine-tuning the OP process in the lab.

On a larger scale, using satellite and overhead imagery, the team has been able to analyze movement over entire regions, identifying slopes that are of concern and examining and remediating these trouble spots.

“We’re still refining the technique,” Oommen said. “But the technology and the ability are available and we’re proving that.”

In the future, it’s highly likely that cameras mounted on unpiloted aerial vehicles, cars and trains will monitor entire networks automatically, sending imagery back for analysis of potential instability. Recently, MTRI has used a high-speed camera that could potentially allow, for example, a car to travel at the speed limit and still get accurate imagery for use with the OP method.

This research is supported by the U.S. Department of Transportation’s Office of the Assistant Secretary for Research and Technology. The two-year project has a budget of around $1.5 million.