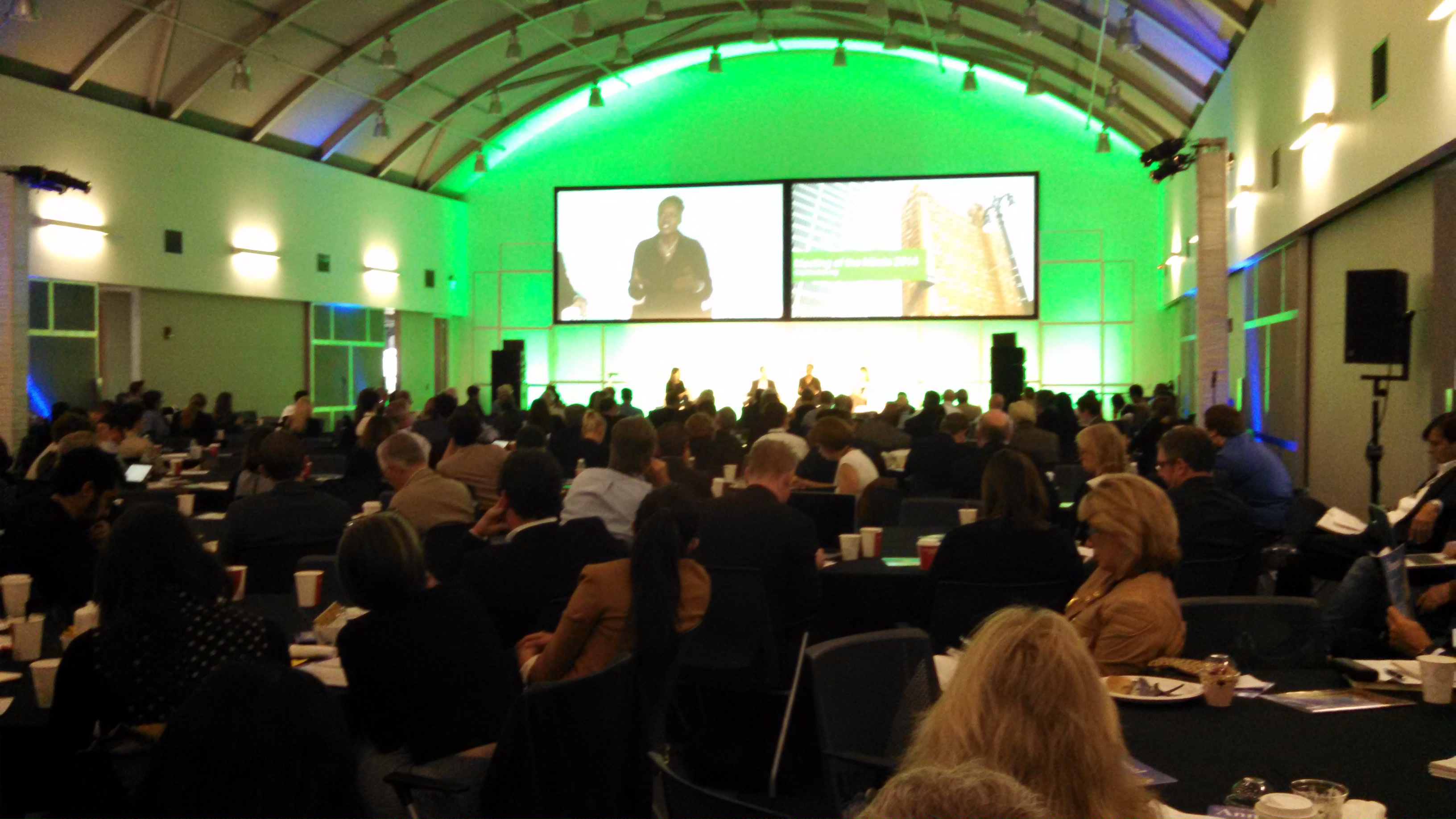 DETROIT — Detroit’s transformation into a high-tech hub, partially driven by the high-tech future of the auto industry, is becoming an international story.

This week, nearly 400 urban planners, entrepreneurs, academics, makers, foundation officials and public officials are picking apart this success story to learn its lessons at the “Meeting of the Minds” global conference.

Attendees from all over the world — the guest list includes Australia,
Brazil, The Netherlands, France, Israel, China and more — are hearing how Detroit’s tech sector is pioneering a new model for private, public and philanthropic collaboration.

And, as panelist Marlin Page — founder of Sisters Code, a group for
women in technology — put it, Detroit is also rewriting the stereotype of the tech entrepreneur as a white male twentysomething.

Panel moderator Ned Staebler, vice president for economic development at Wayne State University, noted that for the first time in generations, Detroit is swimming with macroeconomic trends rather than against them — strong interest among young people in urban living and entrepreneurship.

Talent development was also on the agenda. Tanya Heidelberg-Yopp, CEO of Linked Learning Detroit, said she founded her organization because Detroiters weren’t being developed to “take all these new jobs at all these shiny new buildings downtown.” Founded in California, the Linked Learning effort aims to expose students to careers through interactions with professionals, demonstrate exactly how class material relates to careers, and forge direct relationships between schools and employers.

Asked Heidelberg-Yopp: “How will any urban area ever be a global player if we don’t make the basic assumption that we need every brain at the table?”

Panel moderator Anthony Flint, fellow and director of public affairs at the Lincoln Institute of Land Policy in Cambridge, Mass., and two industrial city mayors discussed remaking collapsed cities, including building off legacy industries. Pittsburgh mayor Bill Peduto said his city’s resurgence was fueled by the foundation community, nonprofits, universities and hospitals, “planting seeds that would take 30 years to take root.” And Rob van Gizjel, mayor of the Dutch city of Eindhoven, talked about how his city, the historic home of the Philips brand, recovered from the loss of 36,000 jobs as Philips restructured.

The problem, even with those restructurings, Peduto said: “There is an entire population that has no ladder to these economic opportunities… folks from the neighborhood must have opportunities for these jobs.”

Thursday, panels discussed what it means to create centers for innovation and entrepreneurship that are accessible to all people. If Detroit’s rebirth consists of replicating a suburban office park in the city, that’s a failure — as panelist Jennifer Bradley of the Brookings Institution put it, “we’re not going for Renaissance Center 2.0. Innovation is not just for fancy people. It is not just for Googlers. It is for anybody who wants to do anything new, different and better.”

Innovation, they said, needs to take place anywhere and everywhere, in community centers and on basketball courts, with grandmothers and grade school kids.

Technology was also a hot topic, especially digital delivery of city services. Wim Elfrink, executive vice president and chief globalization officer at Cisco Systems, talked about how the “Internet of Things” is becoming the “Internet of Everything,” with 50 billion web-connected devices on the horizon by 2020. Gas, water and electric systems will have cloud services, which offers enormous advantages in efficiency for municipalities.

But Elfrink said cities must get out of the business of managing infrastructure in silos like a water department, a lighting department and a transportation department. He called the future of municipal government “minimal government with maximum governance.” Government services come to citizens wherever they are, via the web or kiosk — even, he said, a wedding officiated remotely by city officials from Barcelona, Spain.

All this cuts electric use, transportation use and staff time as people do more business with cities online instead of over a counter at City Hall.

The event is being held in the spectacular 11th-floor auditorium of the A. Alfred Taubman Center for Design Education, part of the College for Creative Studies. The building, at 461 W. Baltimore Ave. in Detroit’s New Center area, also houses the watchmaking operations of Detroit’s famous Shinola.

Officials at the event also announced that Meeting of the Minds is
launching an Urban Innovator of the Week award with the Urban
Innovation Exchange, an initiative to inform, engage and advance
Detroit’s growing innovation movement. UIX is led by Issue Media
Group with Data Driven Detroit, The Civic Commons and a coalition of media and community partners.

One thought on “'Meeting Of The Minds' Explores Detroit's Transformation”