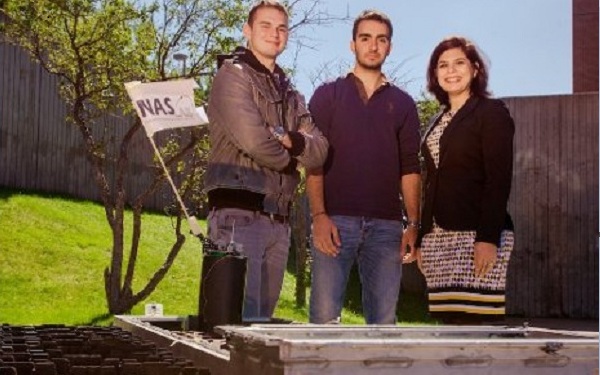 HOUGHTON — Big disasters almost always result in big power failures. Not only do they take down the TV and fridge, they also wreak havoc with key infrastructure like cell towers. That can delay search and rescue operations at a time when minutes count.

Now, a team led by Nina Mahmoudian of Michigan Technological University has developed a tabletop model of a robot team that can bring power to places that need it the most.

“If we can regain power in communication towers, then we can find the people we need to rescue,” said Mahmoudian, assistant professor of mechanical engineering–engineering mechanics at Tech. “And the human rescuers can communicate with each other.”

Unfortunately, cell towers are often located in hard-to-reach places, she said. But, “If we could deploy robots there, that would be the first step toward recovery.”

The team has programmed robots to restore power in small electrical networks, linking up power cords and batteries to light a little lamp or set a flag to waving with a small electrical motor. The robots operate independently, choosing the shortest path and avoiding obstacles, just as you would want them to if they were hooking up an emergency power source to a cell tower. To view the robots in action, see the video posted on Mahmoudian’s website. http://me.sites.mtu.edu/mahmoudian/

“Our robots can carry batteries, or possibly a photovoltaic system or a generator,” Mahmoudian said. The team is also working with Wayne Weaver, the Dave House Associate Professor of Electrical Engineering at Michigan Tech, to incorporate a power converter, since different systems and countries have different electrical requirements (as anyone who has ever blown out a hair dryer in Spain can attest).

In addition to disaster recovery, their autonomous power distribution system could have military uses, particularly for special forces on covert missions.

“We could set up power systems before the soldiers arrive on site, so they wouldn’t have to carry all this heavy stuff,” Mahmoudian said.

The team’s next project is in the works: a full-size, working model of its robot network. Their first robot is a tank-like vehicle donated by Michigan Tech’s Keweenaw Research Center.

“This will let us develop path-planning algorithms that will work in the real world,” Mahmoudian said.

The robots could also recharge one another, an application that would be as attractive under the ocean as on land.

During search missions like the one conducted for Malaysia Airlines Flight 370, the underwater vehicles scanning for wreckage must come to the surface for refueling. Mahmoudian envisions a fleet of fuel mules that could dive underwater, charge up the searching robot and return to the mother ship. That way, these expensive search vehicles could spend more time looking for evidence and less time traveling back and forth from the surface.

Funding has been provided by Michigan Tech’s Center for Agile Interconnected Microgrids. http://aim.mtu.edu/