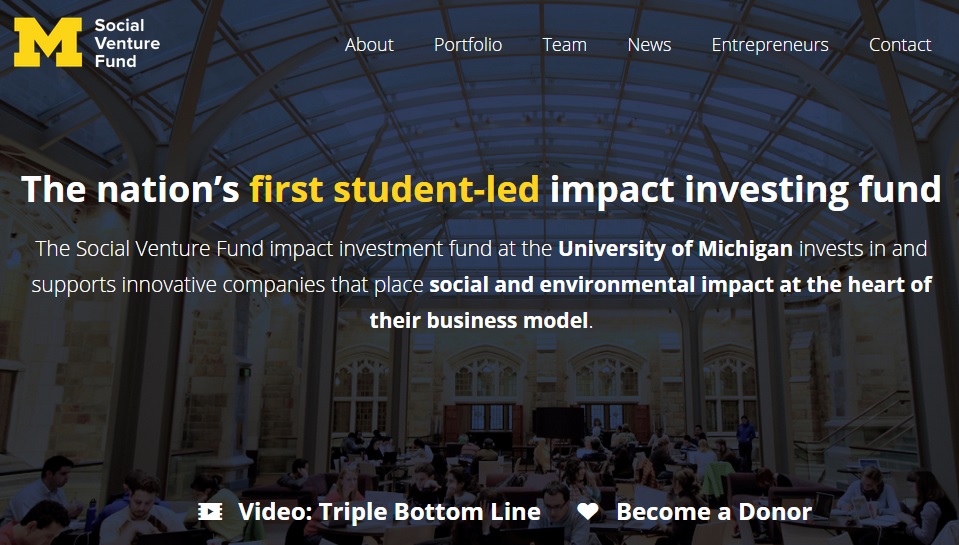 The fund is part of the Samuel Zell & Robert H. Lurie Institute for
Entrepreneurial Studies at UM’s Stephen M. Ross School of Business.

The Social Venture Fund, the nation’s first student-led impact
investing fund, makes early-stage investments of up to $100,000 in
sustainable and innovative, for-profit organizations that deliver
financial returns and place the generation of a significant social impact at the heart of their mission.

The fund is managed by a team of approximately 30 MBA students, many of whom are pursing dual-degrees with education, environment, health, law and public policy, along with faculty advisor Uday Rajan, a professor of finance at the Ross School of Business. It focuses its investments in four key areas, called “circles”: education, food systems and environment, health and urban revitalization.

Loveland Technologies, an investment in the Fund’s urban
revitalization circle, is dedicated to putting every parcel of property in America on the internet — as a way to address urban economic development issues.

Working with governments, neighborhood groups, development and conservation projects, the company aggregates and analyzes public information about property and makes it easily accessible to the public through an online platform and supporting apps, such as
mapping tools.

The company’s Blexting mobile app, for example, powered Motor City Mapping, which cataloged the condition of every piece of property in the city of Detroit with the hope of removing abandoned houses and salvaging lots as a highly visible step toward a broader recovery.

Earlier this year, Loveland was named to Fast Company’s list of the “World’s Top 10 Most Innovative Companies in Local.”

A team of seven students, led by Perry Teicher, JD/MBA ’15, and
Nydia Cardenas, MBA ’15, sourced the deal and conducted in-depth
due diligence on the company.

“The Social Venture Fund was one of the biggest factors that drew me to Ross, and this experience exceeded even my highest expectations,” said Cardenas. “Leading my peers through the due diligence process was a big challenge but also a tremendous growth opportunity because it allowed me to build a new skill set.”

The team determined Loveland would be a strong investment for the Fund — not just because of the positive impact that Loveland’s tools and services could have on Detroit, but also how they could be applied to other cities.

As part of the investment, students will work closely with Loveland’s executive team and its other investors to build out specific social metrics and supporting financial models.

“Loveland first caught our attention because of its local ties and the
interesting urban revitalization work they are doing right in our
backyard,” Teicher said. “But what made the company a viable
investment for the Social Venture Fund was the implications its
technology could have beyond Detroit. The student team took the
lead on analyzing how Loveland’s tools and services could be applied
to future cities and what the long-term impact of that work may be. We really had to dig deep into the model given its complexity, but it was a very intellectually stimulating process.”

The Social Venture Fund is one of three student-led venture funds housed in the Ross School. The others are the Wolverine Venture Fund, one of the world’s first VC funds where students are partners in the investment decision-making process, and the Zell Commercialization Fund, a pre-seed investment fund established to identify and accelerate the commercialization of great ideas generated within the UM community and the surrounding area.