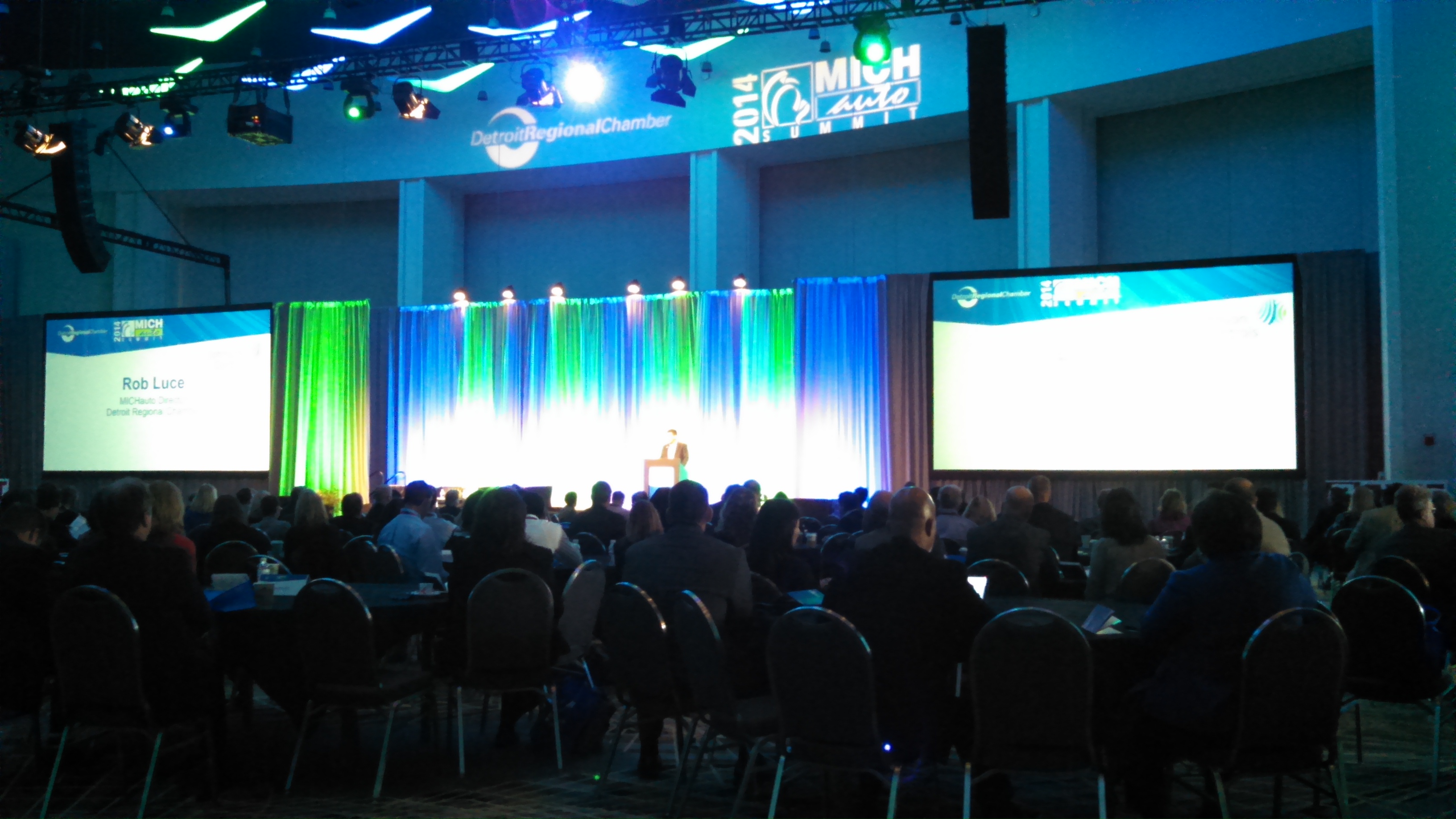 DETROIT — The high-tech future of the automotive industry was on full display Tuesday at Detroit’s Cobo Center for the MichAuto Summit, a program of the Detroit Regional Chamber.

The event opened with Ralph Gilles, president and CEO of motorsports for Chrysler Group LLC and senior vice president of product design, and Jeremy Glover, exterior designer of the Jeep brand design studio at Chrysler, talking about the Detroit Three’s “world class ambitions.”

Design and product testing software now allows engineers almost unlimited freedom and creativity in design — and makes cars safer than ever, with virtual crash tests that also save time and money.

The industry is also on the grow in Michigan — Glover said Chrysler has 35,000 employees now in Michigan, almost double the level of four years ago.

The two men also discussed talent attraction and retention, saying the auto industry is expanding its hiring horizons. Yes, obviously, they still seek mechanical engineers from major universities and designers from schools like the College for Creative Studies. But they’re also seeking people like animators.

“The car is becoming a smart machine, it’s not just an emotional thing now, so we’re starting to think outside the box on where we hire,” Gilles said.

Detroit’s resurgence is also helping the industry attract talent, with increasing numbers of young people fascinated by modern cars, and Detroit’s other brands and attractions helping the effort.

Speaker Andy Ridgway, president of Northville-based IAV Automotive Engineering Inc., talked about his career in the industry, starting with Nissan, where he said he “learned how to make automobile bodies, one every 58 seconds.” Promoted, he had to think about how to build auto bodies 500 at a time. Now, as IAV CEO, he’s thinking a decade at a time.

Ridgway said IAV’s sales have increased 10-fold in the United States
since 2011 and will continue to increase at double digits for the
foreseeable future. It’s also added North American offices in Palo
Alto, Cali. and Mexico City.

Why does IAV have to be in Michigan? He said he’s taken his family all over the world to gather experience on all aspects of the auto industry — but when he got to Detroit, he realized that all those skills are available within 20 miles of Detroit.

“The riches that we have in this area, there’s no concentration like this anywhere else on the planet, and we need to shout that more from the rooftops,” Ridgway said.

Ridgway said telematics and vehicle-electronic integration are defining a whole new industry within the auto industry.

Ridgeway also said the key to talent attraction is to start long before the university level: “We need to capture the imagination of young people and motivate them.”

In a session on talent attraction in skilled trades, Brian Gruber, general plant manager for molding operations at Lacks Trim Systems, says there’s still a “misconception that manufacturing is dirty. That it’s dark, it’s loud, it has an aroma to it.” The truth is, Gruber said, is that today’s manufacturing centers are “bright, clean, high-tech” places where there’s high-speed WiFi internet access in the break room.

“And it’s not just the kids,” Gruber said. “We’ve got to get the parents in the building.”

Mark Reuss, executive vice president for global product development, purchasing and supply chain at General Motors Co., told the group that the job Michigan does educating its children “will make or break Detroit and this state.” He complained that in a recent study of 33 developed nations, U.S. students were 21st in science literacy and 25th in mathematics literacy, and called these figures “deplorable” and “a national crisis.”

“We need to encourage students to pursue the STEM subjects, particularly engineering, and we have to attract engineering students to the automotive industry once again,” Reuss said. “We need to convince our young engineers and other graduates that the auto industry is the most dynamic and exciting industry on earth — because it is. Otherwise, they will look at other options, and that is a list that is growing every year.”