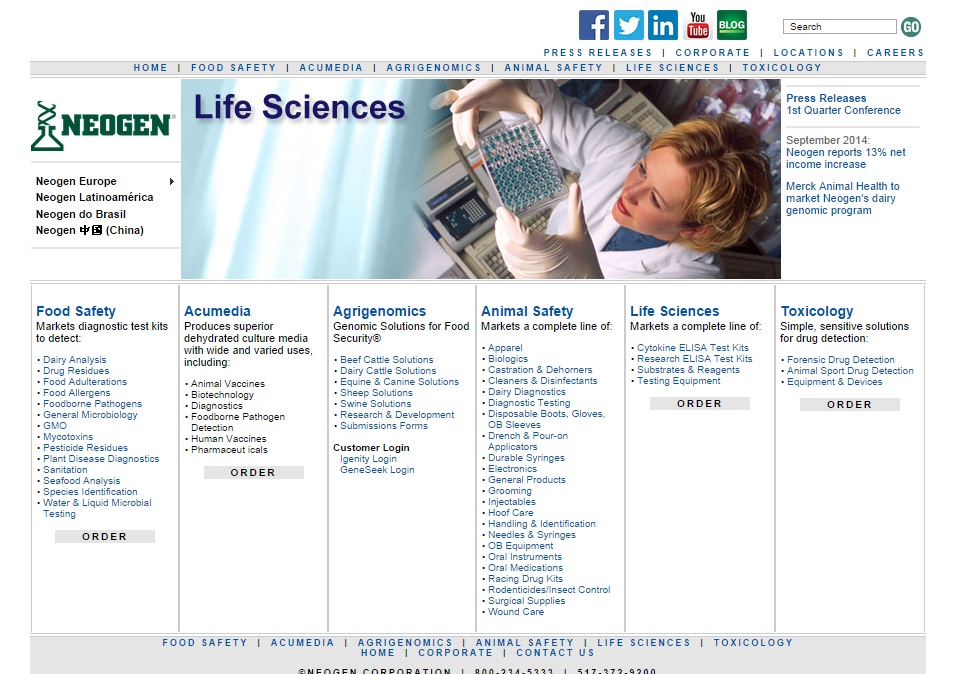 LANSING — The food and animal safety testing products maker Neogen Corp. (Nasdaq: NEOG) reported net income of $8.9 million or 24 cents a share in its first fiscal quarter, which ended Aug. 31. That’s up 13 percent from $7.8 million or 21 cents a share in the same quarter a year earlier.

Both revenue and net income are quarterly records for the 32-year-old company.

“The first quarter was a solid start to our 2015 fiscal year, and again shows that enhancing the safety, quality and quantity of the global food supply is a sustainable strategy,” said Neogen chairman and CEO James Herbert, adding that the company set records despite the fact that it “faced a difficult comparison with an especially strong first quarter of the previous fiscal year. Our first quarter results and strong balance sheet provide a solid foundation from which to continue our growth momentum in the coming year.”

Neogen’s gross margin was 50.4 percent of sales in its first quarter of the current year. Operating expenses rose by 15 percent for the quarter, in line with the overall revenue increase. First quarter results were favorably impacted by a $241,000 gain in other income related to an earn-out provision in the SyrVet acquisition. Also in the first quarter of fiscal 2014, charges of $636,000 were recorded due to currency translations.

The first quarter was the 90th of the past 95 quarters that Neogen reported revenue increases compared with the previous year — including all consecutive quarters in the last nine years.

Neogen’s revenue growth for the first quarter of its 2015 fiscal year was led by the 28 percent revenue increase reported for its Animal Safety segment. The acquisitions of SyrVet (veterinary instruments) in July 2013, Prima Tech (veterinary instruments) in November 2013, and Chem-Tech (agricultural insecticides) in January 2014, contributed significantly to the company’s revenue increase for the quarter.

Neogen’s Food Safety segment recorded revenue growth in the first quarter of fiscal year 2015 of 3 percent, as increased sales of multiple product lines into several market segments more than offset lower sales of mycotoxin and meat speciation test kits compared to the prior year. The lower sales of mycotoxin kits are the result of relatively clean grain supplies in North America and Europe; last year’s first quarter had significant sales due to mycotoxin outbreaks in both areas. Sales of the meat speciation kits rose significantly in January 2013, when it was discovered that horse meat was being mixed in with ground beef in Europe, and resulted in spikes in kit sales in our fiscal 2013 fourth quarter and fiscal 2014 first quarter. The adulteration problem has largely been controlled since then, and testing levels have declined, although not back to pre-scandal levels.

Revenues from Neogen’s agrigenomic business increased 16 percent in the current quarter when compared to the first quarter of fiscal 2014. This increase was the result of a 52 percent increase in genomic sales from Neogen’s subsidiary in Scotland as well as increased market penetration of the existing product line and new genomic product offerings. The new offerings include a genetic test for developmental duplication in Angus cattle, a genetic condition characterized by the growth of extra limbs.

Neogen recently announced that it entered into a strategic agreement with Merck Animal Health for the distribution of Neogen’s Igenity Dairy Heifer Program. The program consists of genomic tests that offer commercial dairy producers essential information on the genetic potential of replacement dairy heifers. With the agreement, Neogen will benefit from placing its product into Merck Animal Health’s extensive dairy sales and technical services organization, and Merck Animal Health’s customers will have easier access to the innovative dairy genomic tests.

Revenues in the current quarter were also boosted by a 39 percent increase in sales of Neogen’s rodenticide products, when compared to the prior year quarter. This large increase was due primarily to the significantly increased use of a Neogen Prozap product to combat a vole outbreak in the Northwest United States.

The current quarter also included a significant increase over a year ago in sales of its veterinary detectable needles, including its D3 Needles. Neogen’s D3 Needles are exceptionally strong, to lessen the chance of breakage when treating an animal, and also are easily detectable in standard meat processing metal detectors in the unlikely event they ever break. The company’s current first quarter also saw a significant increase in sales of its veterinary syringes, forensic kit sales and fly control products.