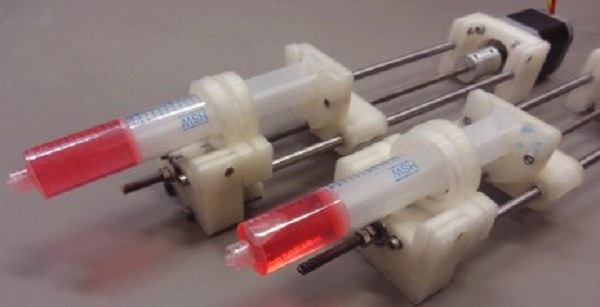 HOUGHTON — Furnishing a research lab can be pretty expensive. Now a team led by an engineer at Michigan Technological University has published an open-source library of designs that will let scientists slash the cost of one commonly used piece of equipment: the syringe pump.

Syringe pumps are used to dispatch precise amounts of liquid, as for drug delivery or mixing chemicals in a reaction. They can also cost hundreds or even thousands of dollars.

Joshua Pearce and his team of Michigan Tech students published the library of free syringe-pump designs, which anyone can make on a RepRap 3D printer just for the cost of the plastic filament. Better yet, the designs are completely customizable.

“Not only have we designed a single syringe pump, we’ve designed all future syringe pumps,” said Pearce. “Scientists can customize the design of a pump for exactly what they are doing, just by changing a couple of numbers in the software.”

The library includes recipes for most parts of a syringe pump. You’ll have to buy the small electric stepper motor that drives the liquid, some simple hardware and the syringe itself, which is inexpensive.

“That way, you can link the syringe pump to the network, sit on a beach in Hawaii and control your lab,” Pearce said. “Plenty of people can have access, and you can run multiple experiments at the same time. Our entire single-pump system costs only $50 and can replace pumps that run between $250 and $2,500.”

It costs more to make a double-pump system, about $120, but it replaces a commercial system that costs $5,000.

That said, Pearce believes someone will figure out how to make them even better and cheaper.

“The international scientific open-source lab community is growing rapidly,” Pearce said. “From UC Berkeley’s Tekla Lab to Sensorica in Montréal and OpenLabTools at the University of Cambridge, we are all working together to make science cheaper, faster and better. I’m sure someone will improve our designs and share their results with us and the rest of the community. That’s the beauty and power of open source,” he said.

“What’s beautiful about what Joshua is doing is that it lets us run three or four experiments in parallel, because we can get the equipment for so much less,” she said. “We’d always wanted to run experiments concurrently, but we couldn’t because the syringe pumps cost so much. This has really opened doors for us.”

The work is described in the paper “Open-source Syringe Pump Library,” published in PLoS One and coauthored by Pearce, graduate student Bas Wijnen, research scientist Gerald Anzalone and undergraduate Emily Hunt. The hardware plans, designs, and source code for the pumps is available for free at http://www.appropedia.org/Open-source_syringe_pump.