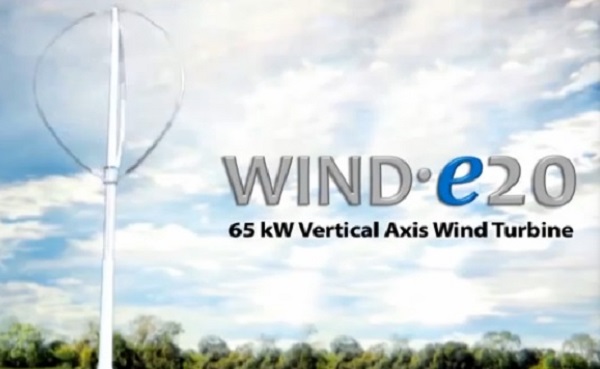 The patent is for a fluid driven turbine that uses a rotor which rotates at an axis transverse to the fluid flow.

“The Wind e20 is the face of distributed wind power in the future,” said Bryan Zaplitny, president and CEO of CGE.

Wind-powered electrical generators in current use commonly employ a horizontal-axis, propeller-like, wind turbine to capture power from air flowing parallel to the rotational axis of the turbine blades. However, as the wind direction changes, traditional turbines must be mounted so they pivot on horizontally to face
directly into the wind.

“Being able to produce power from any wind direction is an advantage WIND e20 has over the traditional horizontal wind turbines you see in large wind farms,” Zaplitny said.

Zaplitny is named as an inventor of the patent, along with Rupert de
Salis, CGE’s lead engineer. The company has three other patents
pending on their proprietary 105-foot turbine. The patent application also lists 13 other advantages of CGE’s technology.

The original design of CGE’s turbine was developed by Georges
Jean Marie Darrieus, a French aeronautical engineer, in 1931.

Burtek Enterprises of Chesterfield Township has been selected as
the strategic manufacturing and assembly partner of the WIND e20
and is currently designing the assembly line to manufacture them.