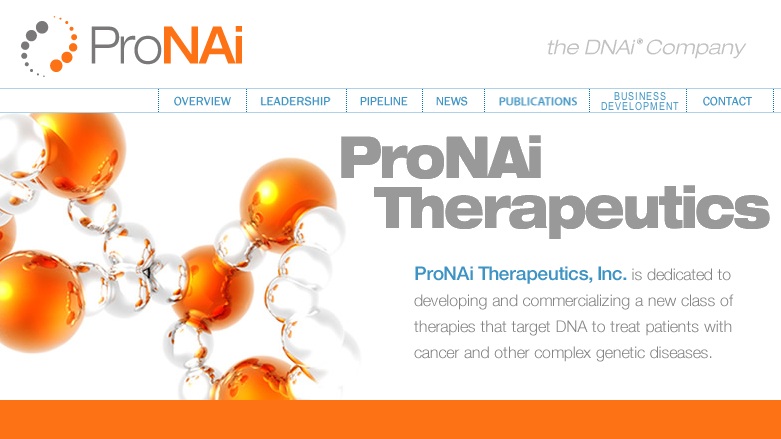 The company said previous CEO Mina Sooch “will be leaving the organization to pursue new opportunities.”

He currently serves on the board of directors of MEI Pharma Inc., a company focused on cancer drug development (Nasdaq: MEIP).

Said ProNAi chairman Donald Parfet: “The company’s organization has reached a critical juncture. We have demonstrated an exciting therapeutic value in PNT2258, our lead product, and now need to accelerate our efforts with expanded late-stage clinical trials. By placing a leader with Nick’s talents and demonstrated capabilities we significantly strengthen our abilities to commercialize the product line. Nick’s strong reputation in cancer drug development and his extensive experience leading public and private biotechnology companies make him a superb choice to lead ProNAi at this critical time.”

Said Glover: “I’ve been highly impressed by the quality of the development and clinical work conducted by the ProNAi team, resulting in a portfolio of promising novel drug candidates … There is a significant need to develop and deliver therapies that will make a meaningful difference in the lives of cancer patients. ProNAi’s proprietary DNAi technology is a promising emerging modality that has the potential to yield impactful oncology therapeutics, and I look forward to leading the company and bringing these novel treatments to patients.”

ProNAi’s PNT2258, uses DNA to modify a gene in cancer cells, resulting in cancer cell death. To date, 35 patients have been treated with PNT2258 in Phase I and Phase II studies, with promising results. ProNAi is also exploring DNA interference technology against other diseases.

Parfet added: “On behalf of all of ProNAi’s stakeholders I would like to thank Mina Sooch for her outstanding contributions to the Company. ProNAi has made great strides under Mina’s stewardship, raising significant capital, and successfully positioning ProNAi for aggressive growth and value creation. Mina is a talented entrepreneur and seasoned life sciences executive, and we wish her every success in her future endeavors.”