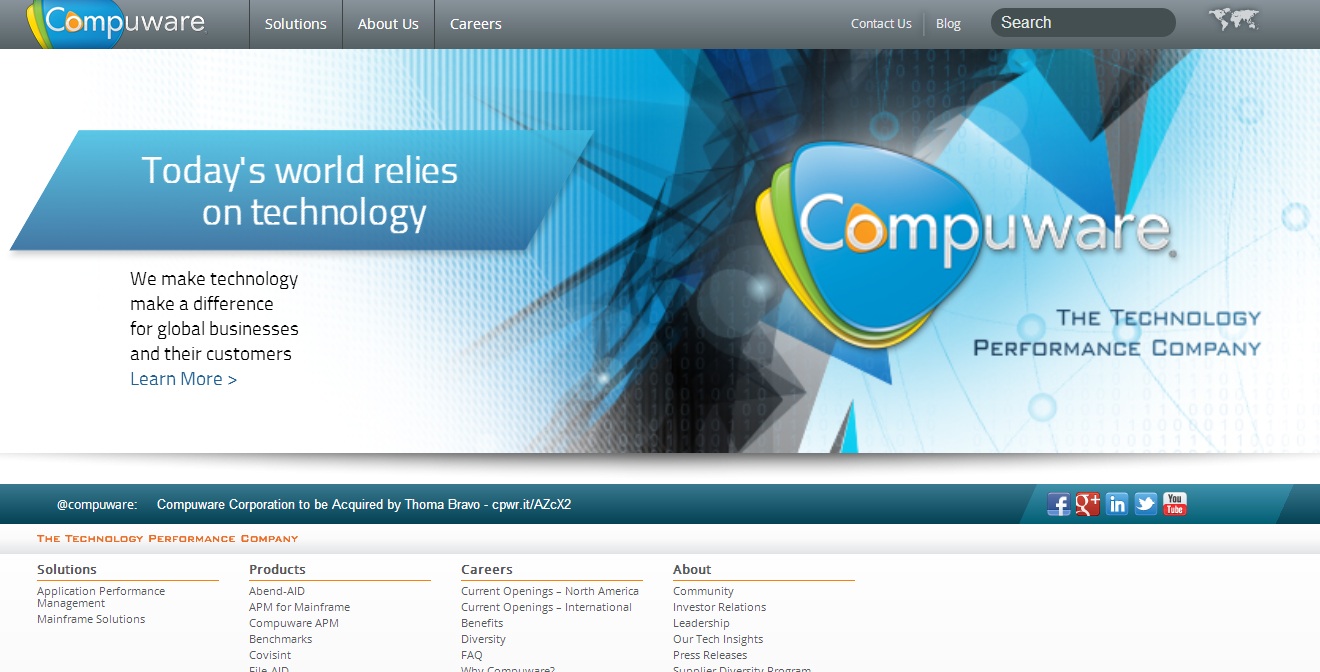 DETROIT — As Compuware Corp. goes private in a buyout by a Chicago private equity firm, its CEO says you can expect some layoffs in the “resources that we have in being a public company” — financial reporting, regulatory reporting, investor relations, public relations.

But on the technology side, Bob Paul says you can expect Compuware to grow under the ownership of Thoma Bravo LLC — and to remain in Detroit.

“Absolutely, this location is going to continue,” Paul said in an interview with Technology Century Wednesday. “Our key resources are here. We have a lot of talented technology people that you can’t pick up and move, and that you couldn’t find anywhere else, and I mean that sincerely. You couldn’t go to another city and find the number of talented mainframe people with the level of experience that we have inside this company today.”

Paul said Thoma Bravo first started showing an interest in Compuware about a year ago, but at that point he said Compuware was still working on cutting “a bloated cost structure” and establishing its leadership in a kind of software called application performance management — assessing the speed and ease of use of business applications on the Web and mobile devices. As Compuware got to work slashing $120 million a year in costs, Paul said, the talks got going in earnest three to four months ago.

As for Compuware’s new owners, Paul characterized them as being unlike the stereotyped slash-and-burn private equity firm.

“They are a very strong technology oriented PE firm, they’ve been in place 30 years, and they’ve got a great track record of successful investments in tech companies,” Paul said. “The main thing they hang their hat on is that they like to work with existing companies and their existing leadership. Rather than bring in hired guns, they don’t do a deal unless, No. 1, they believe the business is good standing, and No. 2, the leadership team is in place to get that job done.”

And what is that job? “To grow as fast as we can and be as profitable as we can,” Paul said.

But like any private equity firm, Paul said eventually Thoma Bravo will be looking to cash out: “At some period of time, three to seven years, they will be looking for some form of exit strategy, but we’ll see what happens.” That exit strategy could involve selling the company again or taking it public again, Paul said.

As for Paul, he said he’s “committed to stay through a transition period. It’s unclear to me right now whether it makes sense for me to stay longer term or not.” But Paul said there “will be no disruption of the business. If I do end up transitioning out I will make sure we are well represented and well managed. We’ve got two very experienced business leaders running our two main business units. We just hired one of the premier mainframe guys in the country, and a very strong guy we brought on board through an acquisition is running our APM business and he will stay.”

Asked what made him most excited about Compuware’s future, Paul said it’s the APM business.

“APM is one of the hottest IT categories out there today,” Paul said.

Companies in every industry, from retail to automotive, must have reliable, easy-to-use applications to reach their customers on the web and mobile devices. Paul said that environment is “becoming vastly more complex,” with a wide variety of devices that must be made compatible, and cloud infrastructure and both public and private data centers to link up. And Paul said that according to the tech analytics firm Gartner, Compuware is now the No. 1 company in the world in providing technology to solve application performance problems in that vastly more complex environment.

Also boding well for Compuware’s future, Paul said, is the company’s concentration in far fewer product areas than just a couple of years ago — when it was struggling to compete in nine very different IT sectors. Then there’s those cost cuts — Compuware’s elephant in the room until recently was that it was running at twice the expense rate of its competitors, Paul said. Now, with $120 million a year less in expenses, Paul said Compuware is poised to become much more profitable.