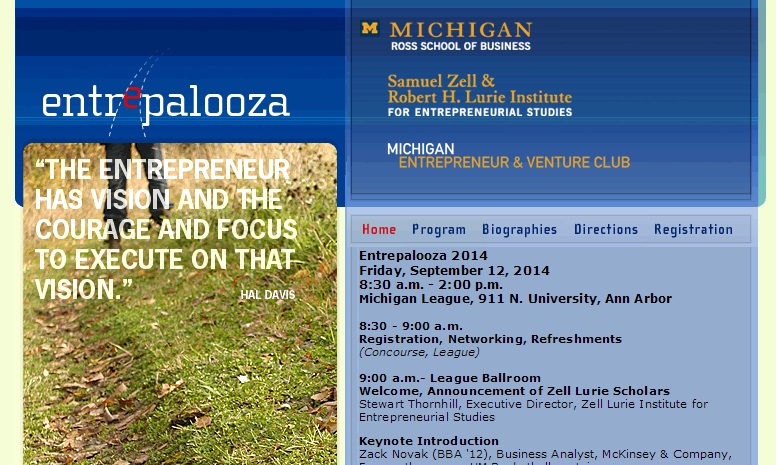 ANN ARBOR — The University of Michigan’s annual entrepreneurial symposium, Entreprelooza, will return for 2014 on Friday, Sept. 12.

Entrepalooza is sponsored by the Samuel Zell & Robert H. Lurie Institute for Entrepreneurial Studies at UM’s Ross School of Business.

It will feature a keynote address at 9 a.m. from Rob Pelinka, founder of Landmark Sports Agency. Pelinka received a bachelor of business administration from UM in 1993 and a UM law degree in 1996.

Pelinka played on three NCAA Final Four basketball teams while at UM and won a national basketball championship in 1989.

After graduating from Michigan, Pelinka began a career in sports law, where he became one of the world’s preeminent sports agents by representing such global icons as Kobe Bryant and James Harden through Landmark Sports Agency, which he founded. Pulling from his own educational and entrepreneurial experiences, Pelinka will speak about his business endeavors and share anecdotal advice with the motivated entrepreneurs in the audience.

Also sponsoring the annual university-wide symposium are the Ross School’s Entrepreneur and Venture Club, the UM Center for Entrepreneurship, Innovate Blue, the UM School of Information, and Ann Arbor Spark, the Ann Arbor area’s economic development agency. It is free and open to the public.

The event aims to bring together entrepreneurship and venture capital leaders to share their insights and experiences with students from many areas of study, alumni, faculty and members of the broader business community.

The program also includes concurrent panel presentations by leaders in the local entrepreneurial and venture capital community to provide expert advice on young entrepreneurs, pathways to entrepreneurship and innovating inside corporations.

Following the event, there will be an informal luncheon from 11:40 a.m. to 12:40 p.m. that will provide students the opportunity to have small group discussions on a variety of selected topics with experienced entrepreneurs and venture capitalists. Students will have the opportunity to ask questions about the different stages of the start-up lifecycle and starting businesses in different industries.

For more information or to register to attend the event, please go to www.epalooza.bus.umich.edu/. To receive event updates or share your thoughts from the symposium, use hashtag #epalooza on Twitter.