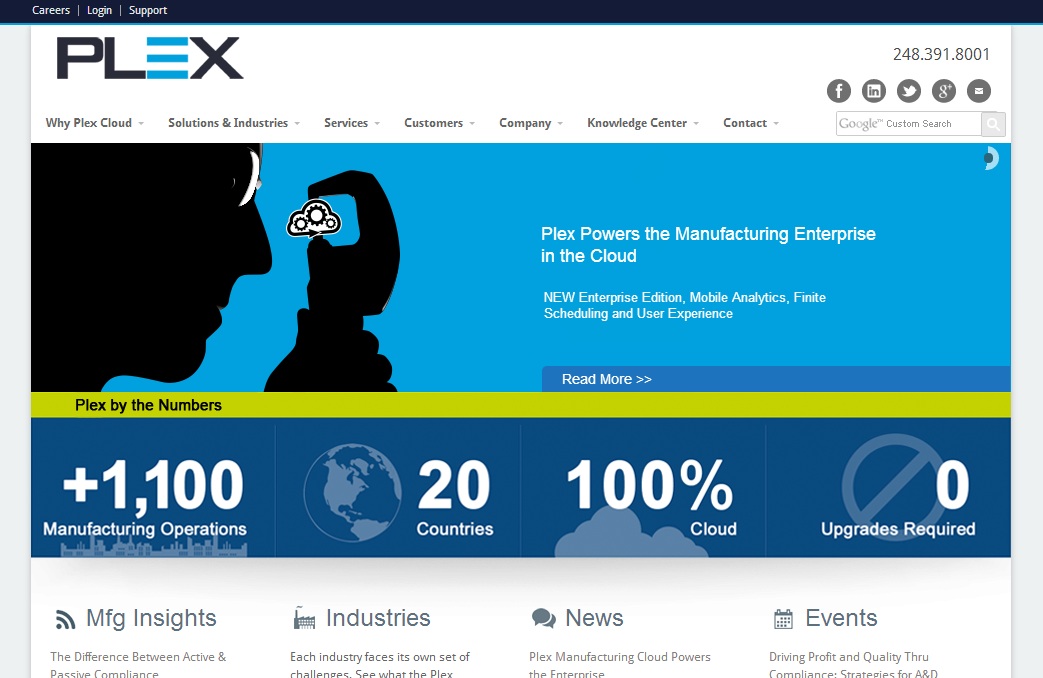 TROY — The manufacturing management software developer Plex Inc. says it added more than 30 new customers in the first half of 2014 — a period during which 25 new customers also went live on Plex.

Among the new customers added:
* Irwin Seating Co. of Grand Rapids, a manufacturer of public seating for movie theatres, auditoriums, arenas, performing arts centers and convention centers. The company plans to replace more than 35 disparate, legacy ERP systems with the Plex Manufacturing Cloud.
* Queen City Pastry of Mooresville, N.C., which has been manufacturing fine pastries and desserts for more than 15 years, serving companies such as Dean and DeLuca, Harris Teeter, Costco and high-end restaurants and hotels.
* Ritron Inc. of Carmel, Ind., a manufacturer of two-way radio equipment and systems for a wide range of industries — from locomotives to school security and retail. Ritron’s plans for the Plex Manufacturing cloud include comprehensive quality management and reduction in overall IT costs.

Among the customers that went live in the first half were:
* Aaron Thomas Co., a full-service corporate contract packager specializing in warehouse club and food packaging services. The company runs the Plex Manufacturing Cloud to power locations in Los Angeles, Chicago and Memphis.
* MP Mitchell Plastics of Kitchener, Ontario continued its Plex implementation at the second of four plants in North America. The company supplies automotive interior mechanisms and decorative components.
* Desert Lake Technologies of Klamath Falls, Ore., which deployed Plex to support its operations harvesting and drying microalgae for nutraceuticals and nutritional supplements.

“2014 is the year of the manufacturing cloud,” said Plex CEO Jason Blessing. “From global enterprises like Inteva to the artisans at Queen City Pastry, the cloud is powering the leaders and innovators in manufacturing. The Plex team delivered yet another record-setting first half, with new products, a terrific roster of new customers and a long list of organizations going live on the Plex Manufacturing Cloud. We are perfectly positioned to extend our leadership in cloud ERP through 2014 and beyond.”

“For Inteva, Plex and the Manufacturing Cloud have really been all about partnership,” said Dennis Hodges, CIO for Inteva Systems. “In 2014, as we deploy Plex at another seven sites around the world, we also wanted to put in place a comprehensive financial management solution to support our operations. Plex’s development team has worked hand in hand with Inteva to design, build and deploy new capabilities that meet our needs. That kind of continuous innovation is only available in the cloud, and the best part is that we know more capabilities are on the way all the time.”