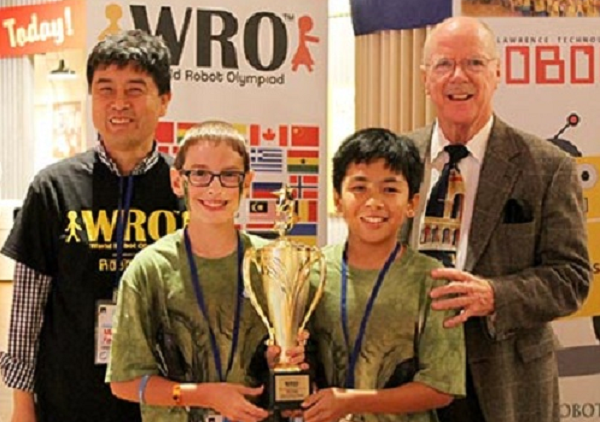 Christian Daniels and Juan Carlos Feraro of Westland, who competed as the Martians, won first place in the open category and advanced to the United States finals, to be held at Lawrence Tech in Southfield on Sept. 27. This year’s WRO open category theme is “Robots and Space.” The task is to create autonomous robots to help people accomplish tasks in space. At the Maker Faire Detroit, eight teams in the open category showed off their creative robotics projects related to space exploration, and the team of Daniels and Feraro won with the two robots they designed to collect soil samples on Mars.

WRO is a global Lego Robotics competition that was started in Singapore in 2004. Each participating country has its own competition, and the winning teams from each country are invited to attend the World Robot Olympiad to compete for gold, silver and bronze medals. In the process, the competitors gain new understanding of science, technology, engineering and mathematics, the STEM disciplines.

The United States has not participated in the past, but this year LTU Computer Science Professor C.J. Chung was appointed as the USA national organizer. Chung is the founder of Robofest, another international competition that makes it fun to learn about robots and STEM subjects.

“This is an event that brings young people from all over the world together,” Chung said of the WRO. “Teams of youngsters get the opportunity to learn more about STEM and develop their creative and problem-solving skills through various robotics challenges.”

This year, nearly 20,000 teams from 49 countries are participating in the WRO. Each participating country has its own competition, and the best teams from each country will compete in the world finals to be held in the Olympic city of Sochi in Russia in November.

WRO-USA will be coordinated by the Robofest office (www.robofest.net) at LTU. The other WRO-USA tournaments will be held in California, Illinois, New York, Oregon, Texas and Washington state.

There is still time to organize a WRO team to qualify to compete in the state finals on Sept. 27. An informational meeting and a “Rocket” game workshop will be held at LTU on Wednesday, Aug. 6, from 6:30 to 8 p.m. in room M218 of the Buell Management Building.

For information, contact robofest@LTU.edu. Another Michigan preliminary tournament will be held at the Cranbrook Schools on Sept. 6. Go to www.wroboto.us to register a team.