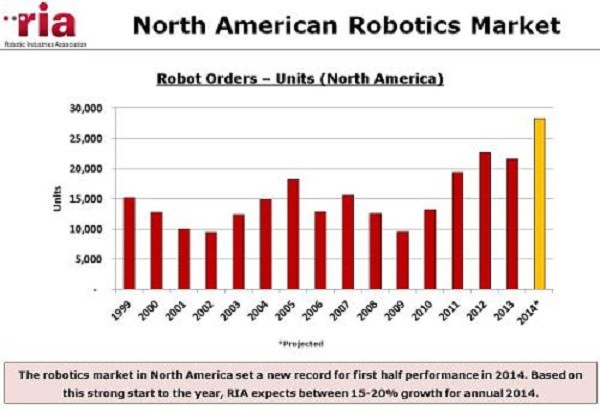 ANN ARBOR — Fueled by strong demand from manufacturing companies in all sectors, the North American robotics industry is off to its fastest start ever in 2014, according to new statistics released from Robotic Industries Association, the industry’s Ann Arbor-based trade group.

A record 14,135 robots, valued at $788 million, were ordered from North American robotics companies in the first half of 2014, an increase of 30 percent in units and 16 percent in revenue over the same period in 2013.

The second quarter of 2014 was the main driver of the market’s record first half, with 8,197 robots valued at $450 million sold to North American customers. This performance shattered the previous record for a single quarter, exceeding the fourth quarter of 2012 by 31 percent in units and 17 percent in revenue.

Since 2010 the robotics market in North America has grown an average of 26 percent per year leading up to its record setting first half performance in 2014.

And at the same time, the unemployment rate in the United States has fallen precipitously over this period.

“In 2010, after one of the worst recessions in our nation’s history, unemployment in the U.S. was nearing 10 percent,” said Jeff Burnstein, RIA president. “Since then, amidst record years for robot sales, unemployment has steadily fallen toward pre-recessionary levels. The unemployment rate reached 6.1 percent in June of this year, the lowest it has been since September of 2008.”

In addition to falling unemployment, manufacturing jobs are now returning to the U.S. because of automation, Burnstein said, contending that “while we often hear that robots are job killers, just the opposite is true. Robots save and create jobs.”

The automotive industry had the biggest impact on the second quarter’s performance, with 97 percent more units ordered over the same quarter in 2013. Robot orders in non-automotive industries such as semiconductors, life sciences, and food and consumer goods grew 22 percent over the first half of 2013, but robots ordered by automakers and auto suppliers grew 36 percent.

“While the automotive industry continues to be the largest customer for robotics, it’s great to see non-automotive sectors posting strong growth as well,” said Alex Shikany, RIA’s director of market analysis. “This is a very positive sign for the long term health of the industry.”

RIA estimates that some 230,000 robots are now at use in United States factories, placing the U.S. second only to Japan in robot use.

RIA is part of the Association for Advancing Automation, which also includes industry groups for machine vision and imaging and motion control. More at www.A3automate.org, www.visiononline.org or www.motioncontrolonline.org.