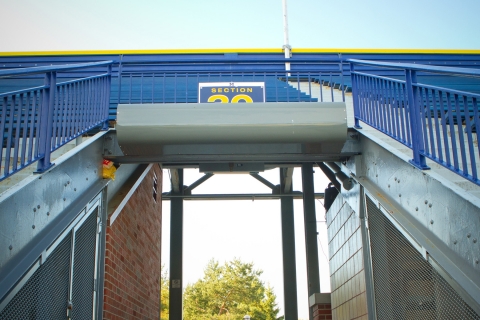 ANN ARBOR — The Big House is ready for big data.

Michigan Stadium in Ann Arbor is among the sports venues that’s been outfitted with distributed antenna systems for high levels of voice and data communication by Switzerland-based TE Connectivity Ltd.

TE is outfitting the venues that will play home to the International Champions Cup soccer tournament, which will see some of the world’s most famous teams play at American stadiums. The tournament begins July 24 and runs through Aug. 4.

In the tournament, participating teams will play three games each in a round-robin format, with the two top teams facing off on Aug. 4 in Miami.

According to a tier-one service provider, major U.S. sporting events have driven as much as 1.9 terabytes of data usage by spectators, representing a year-over-year increase in wireless traffic of 800 percent.

“Mobile devices are an integral part of sporting and entertainment events and fans expect access to all of their services from their seats,” said Peter Wraight, president of TE Wireless. “Stadium owners and mobile operators choose our DAS solutions because they deliver the best possible user experience.”

With nearly 90,000 employees in over 50 countries, TE Connectivity Ltd. makes connections the world relies on to work flawlessly every day. To connect with the company, visit: www.TE.com.