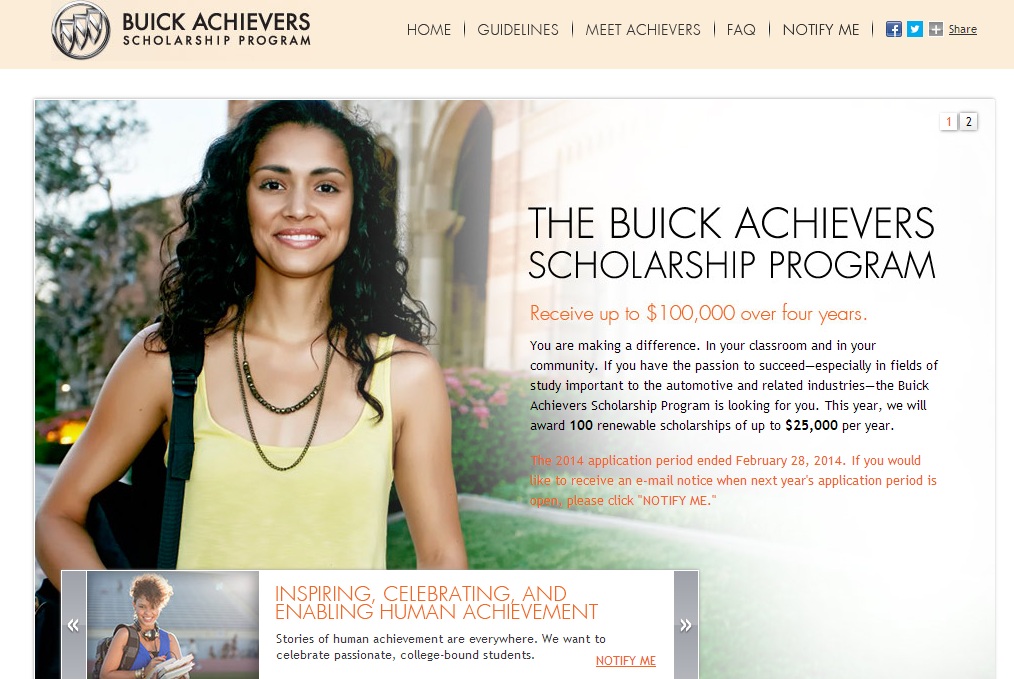 DETROIT — The Buick Achievers Scholarship Program, funded by the General Motors Foundation, announced new scholarships totaling up to $2.5 million to 100 recipients pursuing careers in the areas of science, technology, engineering and mathematics (STEM), as well as IT and other fields related to the auto industry.

In four years since the program’s inception, Buick Achievers has awarded more than $28 million in scholarships to 3,400 high school seniors and undergraduate students, including this year’s recipients and those currently receiving renewal funds through the program. Buick Achievers annually grants 100 students up to $25,000 renewable for four years, and one additional year for those entering a qualified, five-year engineering program.

“Thanks to this scholarship, I can focus on my studies without having to worry about financial constraints,” said Meri Mullins, 2014 Buick Achievers recipient and University of Toledo chemical engineering student. “I’ve always been interested in understanding how the world works. It’s my goal to instill this passion in future generations so they too can gain an interest and appreciation for STEM fields.”

According to the U.S. Department of Education, only 16 percent of American high school seniors are proficient in mathematics and interested in a STEM career. Among those who pursue a college major in the STEM fields, approximately half choose to work in a related career. The United States is falling behind internationally, ranking 25th in mathematics and 17th in science among industrialized nations.

“Our Buick Achievers are evolving the face of STEM in that half are the first in their family to attend college, more than half are female and minorities make up the majority,” said GM Foundation President Vivian Pickard. “These milestones are a positive indication that we’re making great strides to pave the way for our industry’s future leaders and innovators.”

As one of the largest programs in the country, Buick Achievers focuses scholarship awards to students who excel in the classroom and give back to their communities. Special consideration is given to students who are female, minorities, first generation college students, military veterans and military dependents.

Among the 100 students being recognized this year, 61 percent are female. This milestone suggests forward momentum for women who have historically been underrepresented in STEM fields. Half of the recipients are the first in their families to pursue a college education, and more than half are of ethnic backgrounds underscoring diversity. Additionally, 78 percent are pursuing STEM-related majors, with degree programs including computer science and chemical engineering topping the list.

“It’s imperative that young women who wish to pursue STEM-related careers are given every opportunity to make their dreams happen,” said Greg Dehn, general manager and senior vice president, Scholarship America. “By awarding more than half of their scholarships to female students, the GM Foundation encourages women to pursue a career in a traditionally male-dominated field. Buick Achievers’ multi-year, renewable awards will not only make postsecondary education possible for these deserving students, they will also propel them through to graduation and a promising career in STEM.”

Since 2007, the GM Foundation has invested $70 million in educational programs and institutions to help nurture tomorrow’s innovators and leaders. In addition to Buick Achievers, the GM Foundation provides approximately $3 million annually to key university partners and professional organizations to advance STEM curricula.

For more information about the Buick Achievers Scholarship Program, to view the complete list of 2014 recipients, or to register for an e-mail notification when the next application window opens, please visit www.buickachievers.com.