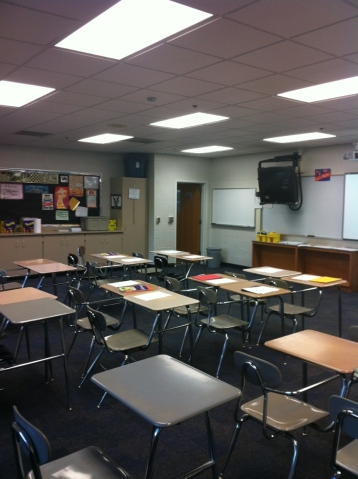 The teaching profession is filled with challenges and rewards. A day in the classroom is unpredictable, to say the least; students say and do unexpected things, good things happen, bad things happen — every day. Education is a widely discussed and debated topic, but theories of reform and best practices need to be weighed within the context of the practical matters of the classroom. As a young professional with a secondary teaching certification in science and math, I have had only a couple years of experience standing in front of a group of students — but it’s been sufficient to broaden my perspective of real life on the other side of the desk.

From June 18 to July 11, 2013, at Troy High School, I taught Basic Math Skills to nine high school students who were learning English as a second language. This session of summer school included sixteen school days, each one of which was four hours long. Out of nine students, six were Chaldean and spoke Arabic, one was Taiwanese, one was Korean, and one was El Salvadorian. I speak Polish and French, but those languages did not help me to communicate given the mix of students! Five of the Chaldean students and the Korean student spoke English fairly well, while the remaining three students spoke no English at all.  Further, some of the students had taken many previous math classes and already knew — or had a quick capacity to learn — the algebra and geometry concepts we were studying.  Some of the students struggled very much with the material.

My main challenge as a teacher arose because of the wide variety of students in my classroom. Their math skills varied, and their English communication skills varied.  For some students, class moved too slowly, and for some, everything was too quick. I varied my teaching style and the format of the class such that we spent ample time doing examples together, writing down definitions for mathematical concepts and repeating the terms so the students would know the words in English, showing pictures and maps and real-life objects, moving around the room doing measurements, and playing games that were fun and also required some mathematical or analytical skill. I had students work in groups and individually, and I invited those who wished to participate more to come up to the board and work problems for the class.

My goal as a teacher was to help each student move from point A to point B, to increase their exposure to math just a little bit, to improve their English just a little bit, and to walk out of class being a little more prepared for the regular school year. The students discovered ways that math relates to the real world, they practiced their practical math skills, and they learned new concepts. I found examples of productive learning every day, and therein lay my reward as a professional. As I connected with the students, they were appreciative and thanked me for working so hard to help them learn — and therein lay my reward as a person.

Lea Wojciechowski is director of education at The Engineering Society of Detroit’s ESD Institute.

One thought on “Math And Language Mix In ESL Classroom”