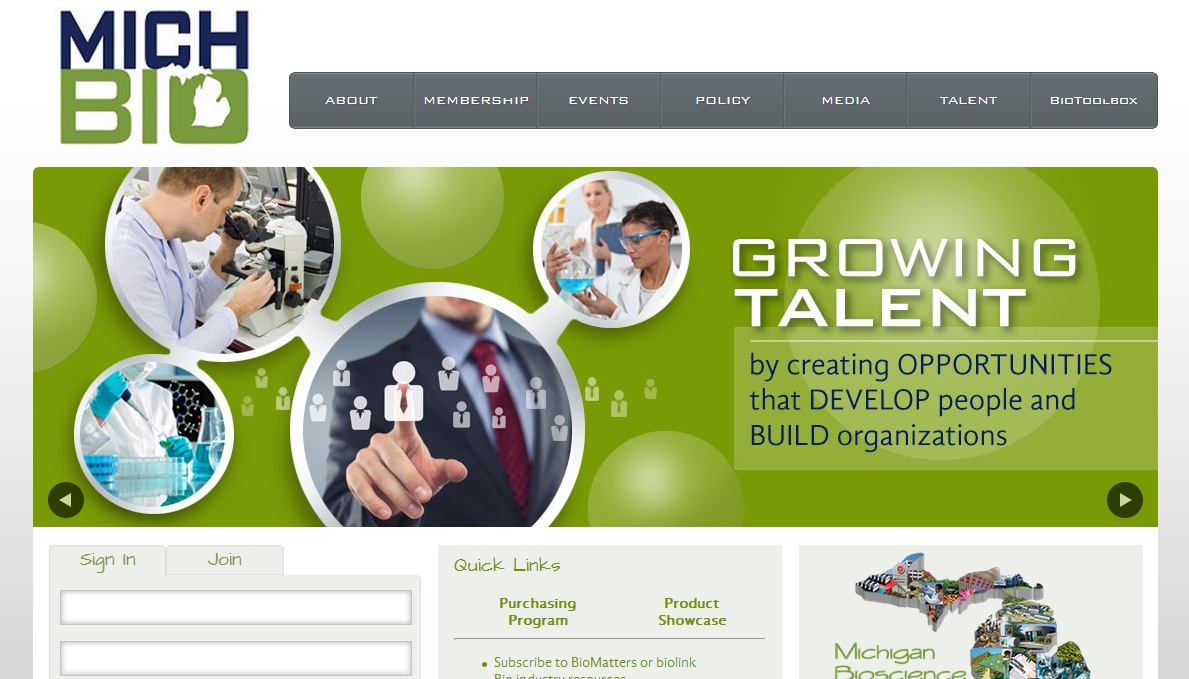 The increase was led by the drugs and pharmaceuticals category, where employment grew 8.7 percent; medical devices and equipment, up 7.5 percent; and research, testing and medical laboratories, up 6.6 percent.

The agricultural feedstock and chemicals sector, while small, saw its employment jump 20.1 percent.

For the full report, visit http://bio.org/Battelle2014. For the Michigan profile only, visit www.bio.org/sites/default/files/SP_Michigan.pdf.

There was also expansion in the number of bioscience companies in the state, with both medical devices and equipemnt and research, testing and medical laboratories up more than 13 percent.

“The new Battelle/BIO findings once again reinforce the fact that Michigan has a robust and growing bio-industry, with specific strengths in several key sectors,” said Stephen Rapundalo, president and CEO of MichBio, the state’s biosciences trade organization. “While the numbers are very encouraging, continued growth is not guaranteed, particularly in the absence of a coordinated strategic plan for developing the state’s bio-industry. We must identify, leverage and promote our strengths if Michigan is to become a national leader in the global bio-economy.”

The Battelle/BIO report measures growth in the bioscience sector from 2007-2012 when the national economy was challenged severely. Several indicators for success were measured, including the numbers of employees and companies, average wages, research and development dollars and patent issued.

Over that longer term, Michigan’s bio-industry saw an 11 percent increase in total number of establishments. During that same time, the number of agricultural feedstock and chemicals, medical devices and equipment, and research, testing and medical laboratories companies grew 58.5 percent, 18.2 percent and 35.2 percent, respectively. The medical devices and equipment and agricultural feedstock and chemicals saw employment gains — 35.7 percent and 16.1 percent respectively — even through the worst years of the Great Recession.

The report also shows that the pharmaceuticals sector has largely stabilized from the industry’s consolidation during the middle of the last decade. Only small losses in establishments and employment were noted. Also, a portion of this decrease was due to reclassification of employees from this sector to other areas based on increased outsourcing by Michigan companies.

The report showed Michigan’s research institutions conducted more than $1.2 billion in bioscience-related R&D in 2012 and the state has an above-average concentration of this key academic research relative to its population. However, funding from the National Institutes of Health to the state’s academic research institutions dropped by 13.2 percent, from $663 million in 2010 to $563 million in 2012. This was due in large part to the overall decrease in congressional appropriations to NIH.

The state’s diverse strengths in medical device manufacturing and drugs and pharmaceuticals accounted for 54 percent of the 2,157 patents issued between 2009 and 2013. Michigan ranked in the top five nationally in the number of agricultural bioscience patents issued during that period. In addition, Michigan bioscience firms have seen an increase in venture capital funding in recent years — $505 million in the biosciences since 2009, with a peak of $156.9 million in 2013.

“Clearly, the cutbacks in NIH funding are of grave concern, as the new discoveries and inventions of bioscience technologies seeds the commercialization pathway,” Rapundalo said.

But he added, “We are encouraged by improvement in investment funding raised by our companies, but the capital markets remain volatile and competitive.”

An analysis of the specific industry sectors revealed Michigan to be a top 10 employer, as well as a “sizeable” and “concentrated” state in the medical devices and equipment sector.