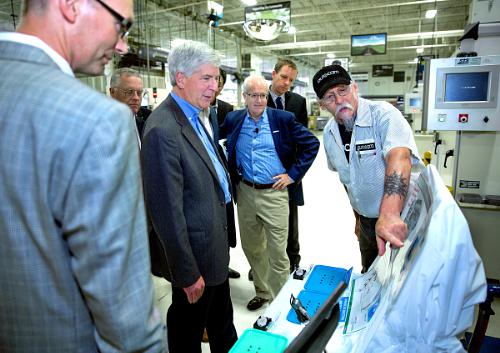 MARSHALL — Kentwood-based Autocam Corp. cut the ribbon this week on a 50,000-square-foot plant in Marshall, doubling the size of its operations in the mid-Michigan city.

Among other products, the $10 million plant will produce metal components for gasoline direct injection fuel systems being assembled for automakers by a plant in Athens, Tenn., owned by Southfield-based Denso International America Inc.

Autocam said the Denso deal is worth $20 million a year and created 50 advanced manufacturing jobs, occupying nearly half of the new plant. Other projects in development will fill the rest of the plant by 2018, creating 35 more jobs, Autocam officials said.

When the new plant is fully operational, Autocam’s Marshall plants will turn out more than $55 million a year in precision machined components and will employ more than 170 people.

“Today our customers are introducing fuel saving technologies, such as Gasoline Direct Injection, which is one of the most effective ways to meet the demand for more fuel efficient vehicles,” said Autocam founder, president and CEO John Kennedy. “Autocam has stayed true to its strategic focus by producing products for GDI and other fuel saving technologies around the world. In the last five years, we have invested over $100 million in people, facilities and process technology to ensure we are positioned at the forefront of advanced manufacturing. It’s only fitting that this next big step in our growth occurs here in the great State of Michigan where it all began for us.”

About 150 people attended the ribbon-cutting, including Michigan Gov. Rick Snyder.