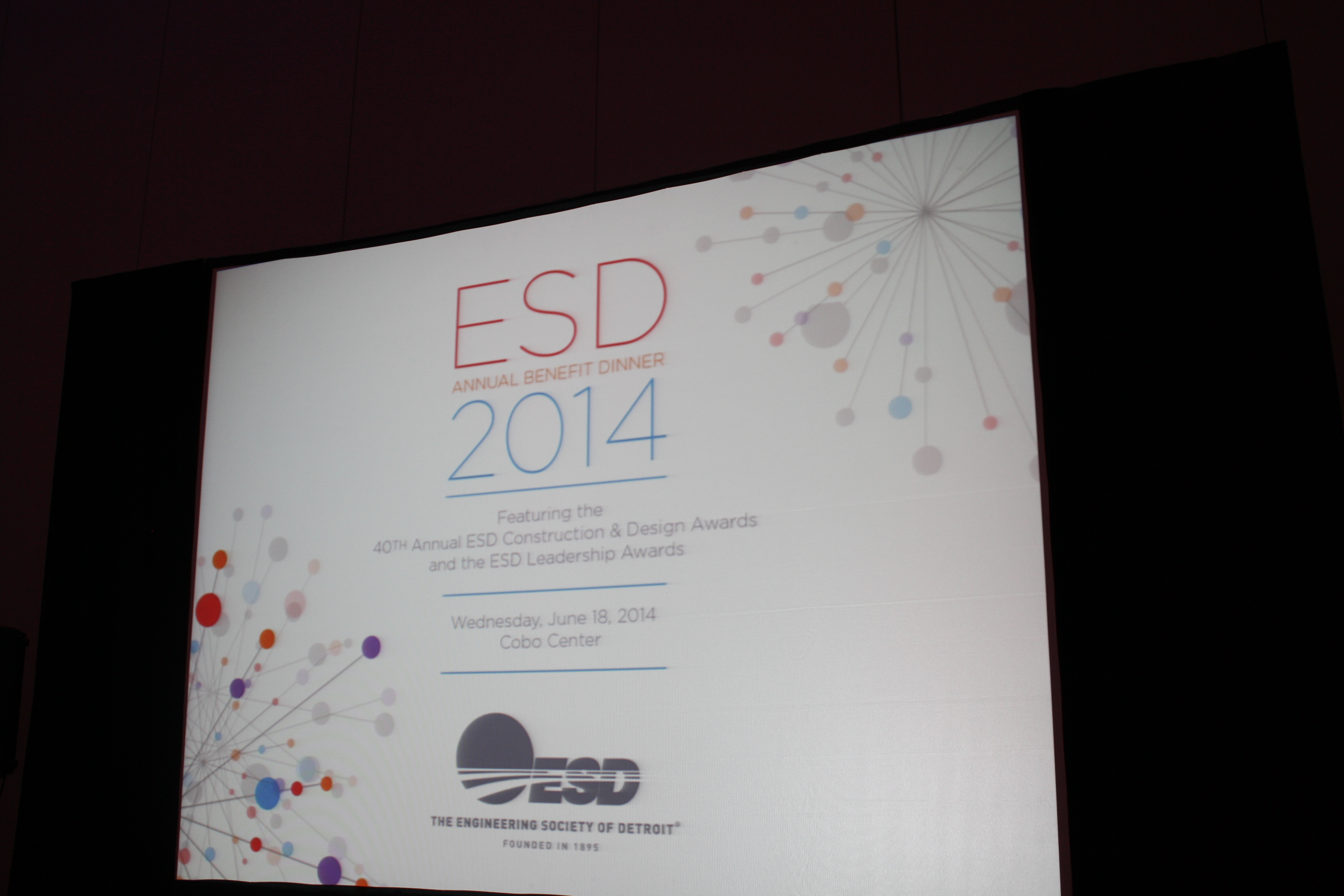 SOUTHFIELD — The Engineering Society of Detroit presented several awards at its Annual Benefit Dinner June 18 at Cobo Center in Detroit.

Christopher Webb, FESD, co-founder and volunteer director of The ESD Institute, received the organization’s highest award, the Horace H. Rackham Humanitarian Award, for his work in important public policy issues – most recently, the Institute’s Pre-K to Job comprehensive literacy and STEM education effort that is starting with a push in the Hamtramck school district that’s being dubbed Project Hamtramck. Webb is a former corporate counsel with Jervis B. Webb Co., a factory automation firm founded by Webb’s grandfather.

Katherine Banicki, FESD, President of Testing Engineers & Consultants, Inc., was awarded the 2014 ESD Lifetime Achievement Award. Katherine was nominated in recognition of her exemplary service and contributions to the ESD and to the field of engineering. Ms. Banicki, alongside her husband, John Banicki, PE, FESD, founded Testing Engineers & Consultants Inc. in 1966. As a firm believer in community service, she is involved in numerous youth, civic, religious and professional organizations along with her widespread philanthropic endeavors. She was previously honored with ESD’s Distinguished Service Award and Outstanding Leadership Award. TEC, a small and woman-owned business, provides client support from property acquisition through construction, renovation and restoration. Expertise includes environmental assessment, consulting and training; geotechnical and facilities engineering and consulting; construction materials testing; and indoor air quality, asbestos, lead and mold management services. Founded in 1966, TEC has offices in Troy, Ann Arbor and Detroit.

The ESD also conferred honorary membership on Isaiah “Ike” McKinnon, deputy mayor of the city of Detroit and professor at the University of Detroit Mercy. The ESD confers honorary membership on individuals who have made outstanding contributions in a field significant to ESD but who are not members of the Society. McKinnon joined the Detroit Police Department in 1965, rose through the ranks and served as Police Chief under Mayor Dennis Archer.

The ESD also named four new members of its College of Fellows. Amember of the College of Fellows must display outstanding and extraordinary qualifications and experience in his or her profession. New Fellows inducted were Dr. Badih A. Jawad, chair of the mechanical engineering department at Lawrence Technological University in Southfield; Douglas Patton, senior vice president of engineering at Denso International America Inc.; Kirk T. Steudle, PE, director of the Michigan Department of Transportation; and Filza H. Walters, director of the masters of architectural engineering program at Lawrence Technological University.

The ESD also granted three Distinguished Service Awards, given for exemplary service and contributions to the ESD or for professional distinction by a member of the Society. Receiving these awards were Kevin Phillips, president of LTI Information Technology, the ESD’s IT provider; Dinesh C. Seksaria, PE, president and product development consulting director at Dinesh C. Seksaria PE PLLC, who mentors in The ESD’s Engineering SMArT Michigan program for high school students; and Jasmine Sisson, lead structural engineer at Parsons Brinckerhoff, who mentors engineering students at the University of Michigan and assisted in curriculum development with Engineering SMArT Michigan program.

The ESD granted six Outstanding Leadership Awards for hard work and dedication while serving on an ESD committee or council. Receiving these awards were Steven Innes, assistant project engineer with NTH Consultants Ltd., who has been an active judge in The ESD’s Future City program for middle school students, and whose work on the renovation of the historic “Yellow Pages” building in Detroit into supportive housing won an ESD Construction and Design award last year; Adam Larky, PE, Central Region Vice President for Cornerstone Environmental Group LLC, an active member of the joint ESD/Michigan Waste Industries Association annual Solid Waste Conference planning committee since 2002 and its current chair; Joseph F. Neussendorfer, president and CEO of U.S. Construction Research, a 38-year ESD member who has served on many committees and councils, a publications contributor and Future City judge; Kenneth Randazzo, manager of Energy Optimization Business Programs and Energy Partnership & Services at DTE Energy, who manages the annual DTE Energy – ESD Energy Conference and Exhibition and its associated E-Challenge energy efficiency awards; Frenae F. Smith, codes and standards supervisor for DTE Energy Gas Operations, who is a past ESD Affiliate Council secretary, a member of the Young Engineers Council, a judge in Future City and Engineering SMArT Michigan who earlier received the ESD’s Outstanding Young Engineer of the Year Award; and Robert P. Washer, FESD, recently retired president of MICCO Construction LLC, a 28-year member of the ESD who currently serves as Chair of the Economic Forecast Conference for the Construction & Design Committee. He received an ESD Outstanding Civic Involvement Award in 1991, was inducted as an ESD Fellow in 2007 and received the ESD Outstanding Leadership Award in 2008. He is also a judge for the ESD Construction & Design Award and a judge and mentor for the ESD Future City competition.

The ESD also presented its David A. Skiven Leadership Award, conferred based on the contribution of an individual that exemplifies with integrity the spirit and advances with inclusiveness the mission of the ESD Institute by fostering sustainable solutions to address the challenges of today and tomorrow for the betterment of society. Receiving the award was Thomas Niczay, superintendent of the Hamtramck Public Schools, for his work with the ESD Institute on Project Hamtramck.

The ESD also presented its Outgoing Affiliate Council Chair Award to Dr. Pranab Saha, PE, secretary-treasurer and principal consultant at Kolano and Saha Engineers Inc., a recognized expert on automotive systems noise and body interior systems. Saha has been an ESD member for more than 20 years and active on the Affiliate Council – which represents the 100 engineering and technical societies affiliated with The ESD – for more than five years.

The ESD also named its Outstanding College and High School Students. At the college level, the winner was Christopher Fazzalare, a senior at Lawrence Technological University majoring in both architectural engineering and architecture, and who is active in many student organizations and an intern at SmithGroupJJR. At the high school level, the winner was Anna Sophia Heidt, a recent graduate of Corunna High School who has been accepted into a special aerospace engineering program at the Massachusetts Institute of Technology and who plans on becoming an astronaut.

Finally, The ESD presented its Construction and Design Awards. The awards went to:

There was also an honorable mention winner in the Construction and Design Awards, the Crittenton Hospital Medical Center South Tower in Rochester Hills. This six-story, 165,000-square-foot addition boasts 87 new private patient rooms and features a design that maximizes patient-staff contact time and minimizes distracting, sleep-disturbing noise in patient rooms. The designer was Harley Ellis Devereaux and the contractor was Barton Malow Rewold.