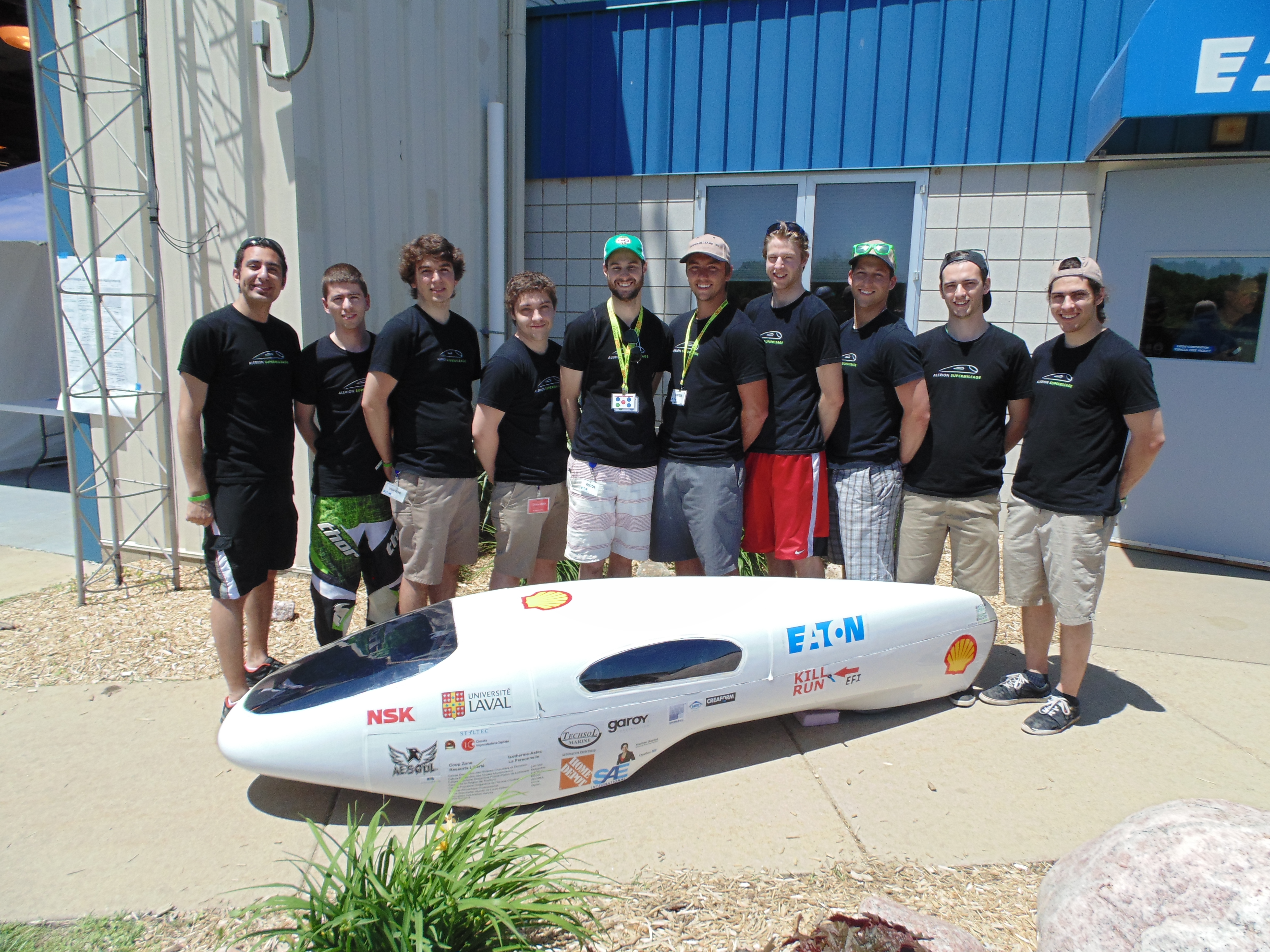 It was 35th year for the competition, which challenges teams to build a one-person, fuel efficient vehicle based around a one-cylinder, four-cycle engine.

“It is truly amazing what these student teams were able to accomplish,” said Tom Stover, chief technology officer for Eaton’s Vehicle Group in nearby Galesburg. “The Supermileage competition helps them develop practical engineering, team building and leadership skills that they can use to succeed in their careers, including making tomorrow’s cars and trucks more fuel efficient.”

A team from Université Laval in Quebec City, Canada, was the overall winner, with a total score of 1,533 (1,145 mpg plus its Design Report score of 388). They won $1,500 and will be recognized at the SAE 2014 Commercial Vehicle Engineering Congress Oct. 7-9 in Rosemont, Ill.

A college in Montréal, Quebec, École De Technologie Superieur, finished second with a score of 1,517 (1,134 mpg plus 383 points for its Design Report), followed closely by Brigham Young University’s tally of 1,514, which included the best overall fuel economy run of 1,211 mpg – marking the second straight year Brigham Young has had the most fuel efficient vehicle in the competition. These schools received $1,200 and $900, respectively.

A team from the University of California at Los Angeles won the Design Report portion of the competition with a score of 408. The University of Illinois Urbana-Champaign team won the Best Newcomer Award. The City College of New York was chosen by the event organizing committee to have the Best Design Execution; Ryerson University of Toronto, Ontario received the Best Demonstrated Overall Team Attitude award; and Concordia University of Montréal, Quebec won the 35th Anniversary Endurance Award (minimum of five successful fuel economy runs).

Hosted by Eaton since its inception in 1980, the Supermileage event is designed to generate public awareness of high-mileage fuel economy and to promote automotive engineering as a career choice for students. Participants are encouraged to use advanced materials and technologies, as well as their design creativity and imaginations, to get the most out of their vehicles over the 9.6-mile course — six times around Eaton’s 1.6-mile test track.

Eaton says its partnership with SAE in Supermileage stems from its broad portfolio of technologies designed to improve the efficiency of specific systems and a vehicle’s overall fuel economy.

Eaton is a power management company with 2013 sales of $22.0 billion. Its products help customers effectively manage electrical, hydraulic and mechanical power more efficiently, safely and sustainably. Eaton has approximately 102,000 employees and sells products to customers in more than 175 countries. More at www.eaton.com.

Founded in 1905, the Society of Automotive Engineers was originally intended to promote the free exchange of ideas in the automobile industry. It is now used as the development standard for automobile, off-highway heavy equipment, and aerospace industries. With over 100 000 members, including educators, engineers, executives and students, it is one of the largest professional organizations in the world.