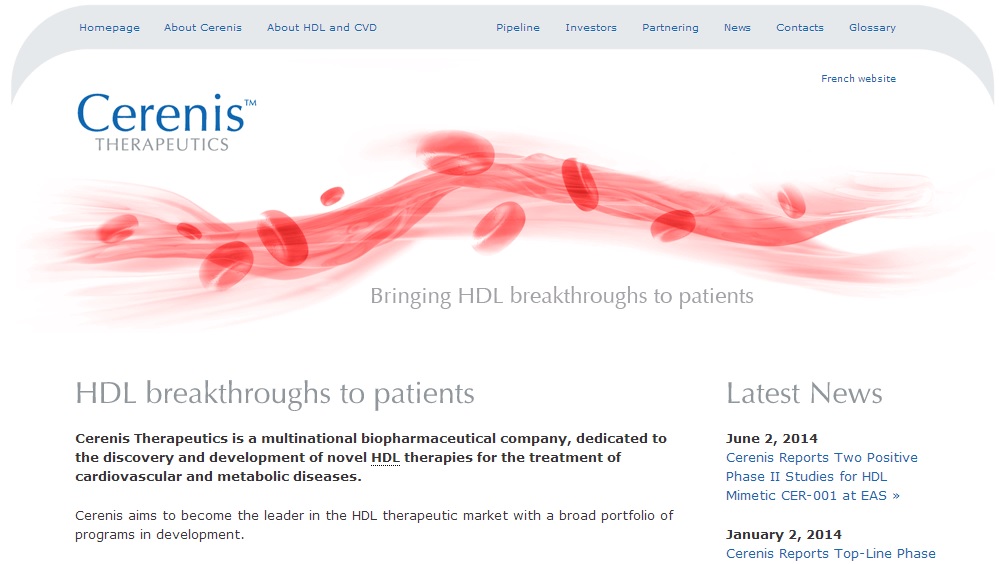 The company said its drug, CER-001 is “complementary” to current treatments to reduce low density lipoprotein, the so-called bad cholesterol, and “may represent a new chronic therapy on top of standard of care” for patients with a family history of high cholesterol due to health problems in eliminating blood fats.

More on Cerenis’ presentation at the European Atherosclerosis Society Meetings in Madrid, Spain at www.eas.kenes.com.

The trial was conducted at the Academic Medical Center in Amsterdam, The Netherlands, and involved seven patients.

The data from patients receiving CER-001 treatment on top of optimized LDL-c-lowering therapy showed that CER-001 performed the four steps of the Reverse Lipid Transport pathway: CER-001 increased cholesterol mobilization and esterification in the HDL fraction, and one month of treatment with 9 doses of CER-001 resulted in a statistically significant reduction in carotid artery Mean Vessel Wall Area, as measured by magnetic resonance imaging. Also, the study showed CER-001 was well-tolerated.

The open-label single-arm active-treatment study in 23 patients with homozygous FH met the prespecified primary clinical endpoint in the modified Intention to Treat population, demonstrating a statistically significant reduction in carotid artery Mean Vessel Wall Area, as measured by Magnetic Resonance Imaging, after six months of bi-weekly CER-001 treatment on top of optimized LDL-c-lowering therapy. CER-001 was well-tolerated in these patients.

Since its inception in 2005, the company has raised €117 million from investors Sofinnova Partners, HealthCap, Alta Partners, EDF Ventures, Daiwa Corporate Investment, TVM Capital, Orbimed, IRDI/IXO Private Equity and the FSI (Fund for Strategic Investment). €10.7 million was also provided by OSEO, the French agency for innovation, to support the development of CER-001.

CER-001 is an engineered complex of recombinant human apoA-I, the major structural protein of high-density lipoprotein, the so-called good cholesterol, and charged phospholipids. It has been designed to mimic the structure and function of natural HDL, also known as pre-beta HDL. Its mechanism of action is to increase apoA-I and the number of HDL particles transiently, to stimulate the removal of excess cholesterol and other lipids from tissues including the arterial wall and to transport them to the liver for elimination through a process called Reverse Lipid Transport.

Hypoalphalipoproteinemia (“low HDL”), as a general term, has historically been defined clinically as an HDL-cholesterol (HDL-C) less than 40 mg/dL and less than 50 mg/dL in women. A number of conditions can contribute to a reduced circulating level of HDL cholesterol — diabetes, Metabolic Syndrome, obesity, and lack of physical activity. In a very small percentage of the population, particularly among patients with the very lowest HDL-C values, there are patients who have a genetic defect (called primary hypoalphalipoproteinemia) affecting either the constituent components of the pre-β particle, the process of pre-β particle synthesis, the steps leading to maturation into an alpha HDL particle, or the rates of catabolism – any of which alone or in combination can then result in an inherited condition of very low circulating HDL particle number.

Familial Primary Hypoalphalipoproteinemia includes patients with a range of individual mutations across the key genes involved in HDL particle production or maturation which are individually extremely rare (less than one in one million births) but can cause low apoA-I levels and low HDL particle numbers through either decreased production or increased clearance and premature destruction of HDL particles and ultimately result in accelerated atherosclerosis. FPHA patients are at high risk of cardiovascular disease as a consequence of having inherited a virtually absent endogenous RLT system. Because of the specific characteristics and very limited available therapeutic approaches, FPHA remains an unmet medical need and a life-threatening condition.

Familial hypercholesterolemia is characterized by high cholesterol levels, specifically very high low-density lipoprotein levels and early cardiovascular disease. Many patients have mutations in the LDLR gene that encodes the LDL receptor protein, which normally removes LDL from the circulation, or apolipoprotein B, which is the part of LDL that binds with the receptor; mutations in other genes are rare. In homozygous familial hypercholesterolemia, serum LDL-C levels may be elevated six-fold. Patients develop severe aortic stenosis and coronary heart disease by age 20 and normally do not respond adequately to drug or diet modification therapy. Although the existing therapies, including statins, cholesterol absorption inhibitors, and LDL apheresis, can significantly reduce circulating LDL-C, nevertheless, LDL-C still remains higher than that recommended by current treatment guidelines, and these patients continue to have elevated rates of heart attack, stroke and death. The prevalence of homozygous FH is approximately one in one million births.