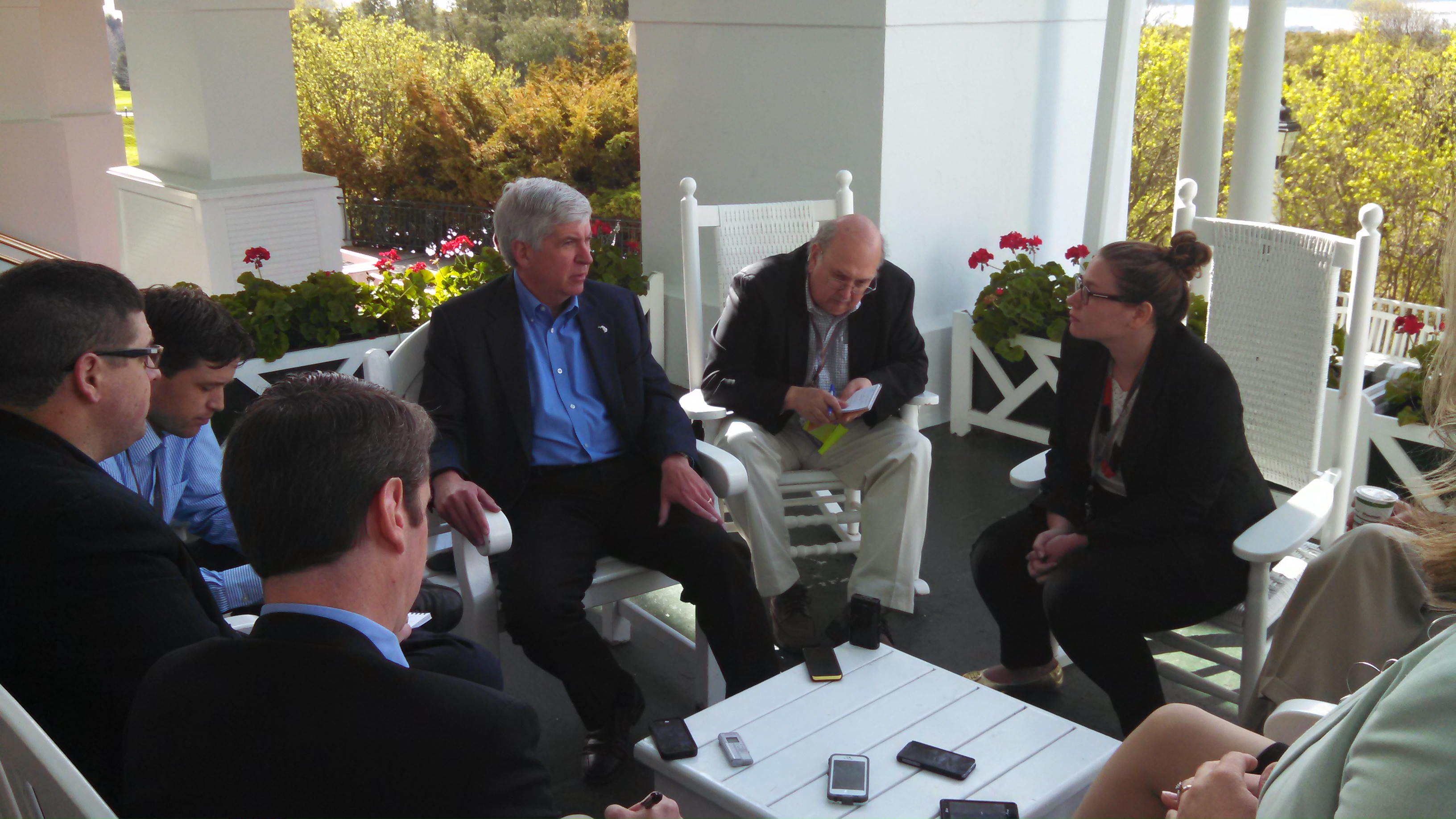 And not just Detroit. The day kicked off with New Orleans mayor Mitch Landrieu talking about how he’s steering a city still reeling from the effects of Hurricane Katrina nearly a decade ago.

The Big Easy’s population plunged from nearly 450,000 in 2005 to
just over 200,000 in 2006, but has since rebounded to more than
350,000. And Landrieu said the challenge is not to rebuild the city just like it used to be — but to use the opportunity of Katrina to rebuild it like everyone always wanted it to be.

Landrieu had nice things to say about Detroit, saying the city had
gotten its mojo back and was on a path to live out its motto, coined
after a major fire in the early 19th century: It will rise from the ashes.
And he said on the day when Detroit figures out that its population
decline has stopped, everyone should stop and have a party. (Well,
what do you expect from the city of Mardi Gras?)

Detroit emergency manager Kevyn Orr followed Landrieu, echoing
the sentiment that the city had come a long way, prompting laughter
with the line: “If you had told me a year ago that (Detroit mayor) Mike
Duggan would walk into the NAACP annual dinner and get a standing ovation, and that I would walk into the House Republican Caucus and get one…”

After the laughter died down, Orr said, “How does that work? But I’ll
take it, because it shows progress.”

Orr also said the city’s bondholders are being “hoodwinked…
bamboozled” by those opposed to the so-called Grand Bargain to
settle the city’s bankruptcy — and who seek to maximize the amount
available to bondholders by selling off city assets like the Detroit
Institute of Arts’ collection.

Orr urged creditors to support the bargain, because if it falls through,
and the nearly $1 billion in bailout money goes away, “we are talking
about severe cuts, we are talking about creditors being unfettered in
attempts to get at every asset of the city. … This is not a game. This is
not a time for protest votes. This is very serious business that could
push people to the poverty rolls and people experiencing a much
reduced quality of life.”

Orr said in general, “my job is to reset the table. But the mayor
(Duggan) and his team are back in the kitchen cooking the meal.”

Orr thanked the state House for its “courageous” vote on the city bailout money and urged the Senate to do the same. And he said he’s confident about the turnaround but is “taking nothing for granted.”

Gov. Rick Snyder also met informally with reporters on the Grand
Hotel porch, saying he didn’t think a dispute over the city’s water
system between city and suburbs should even be part of the Grand
Bargain. Snyder said he had a “constructive discussion” with Oakland
County Executive L. Brooks Patterson on the island over the issue,
adding: “I was straightforward with Brooks — I told him I didn’t think
questions about the water department should be part of the Grand
Bargain. I understand his concerns and I’m happy to help him work
through this — after we get the Grand Bargain done.”

He also pointed out that Michigan has 2,500 local jurisdictions —
cities, townships, school districts — and that only a tiny handful have
required EMs.

Other highlights from the conference’s final day:

* Architect Vishaan Chakrabarti, director of the Center for Urban Real Estate at Columbia University, presented a fascinating set of facts and figures on Detroit’s residential land use and development. The slides will be available soon on the MPC website. Bottom line: In most places, Detroit lacks the housing density required to support mass transit, 30 housing units per acre.

* On the same “Detroit Next” panel, DTE Energy chairman and CEO Gerry Anderson said he’s lived in Baltimore, Pittsburgh and Cleveland, and observed economic turnarounds in all three cities. What starts it, he said, is “strong political leadership that creates confidence in the business community to invest,” and “residents, often young people first, making the commitment to invest their assets in the city.” He said that’s now happening in Detroit.