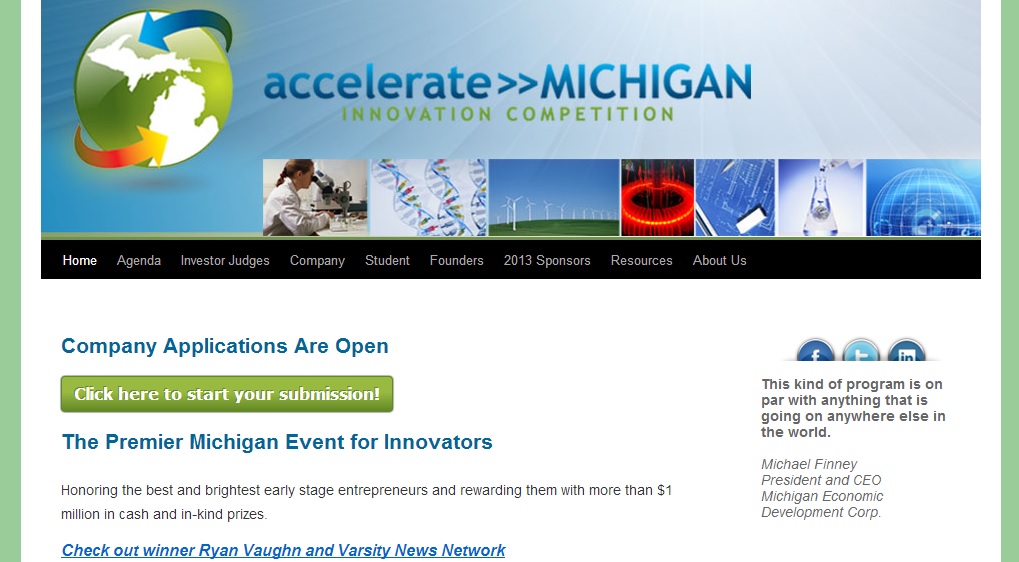 DETROIT — The Accelerate Michigan Innovation Competition is returning this fall for a fifth year, offering $1 mlllion to entrepreneurs both in Michigan and worldwide.

Each year since 2010, AMIC has attracted entrants from across the
United States, and as far away as India, China, Abu Dhabi, South
Africa, the United Kingdom, Germany, Switzerland and Argentina. The catch: AMIC winners are committed to remain in, or relocate their businesses to, Michigan.

Accelerate Michigan is currently accepting applications from start-ups and later-stage entrepreneurs whose technology is past the prototype development stage and falls within one of the following categories: advanced materials, advanced transportation, alternative energy, information technology, the life sciences, medical devices, next-generation manufacturing, and other products and services.

Accelerate Michigan is possible by a grant from the Michigan
Economic Development Corp.’s 21st Century Jobs Fund as well as
corporate and community support. It’s a collaboration between the
Business Accelerator Network for Southeast Michigan and the New
Economy Initiative, and spearheaded by Lauren Bigelow of Growth
Capital Network.

This year’s competition will culminate Nov. 4-6 with a two-day pitch
competition at the Westin Cadillac Hotel in downtown Detroit and Gala Awards Celebration at Detroit’s historic Orchestra Hall.