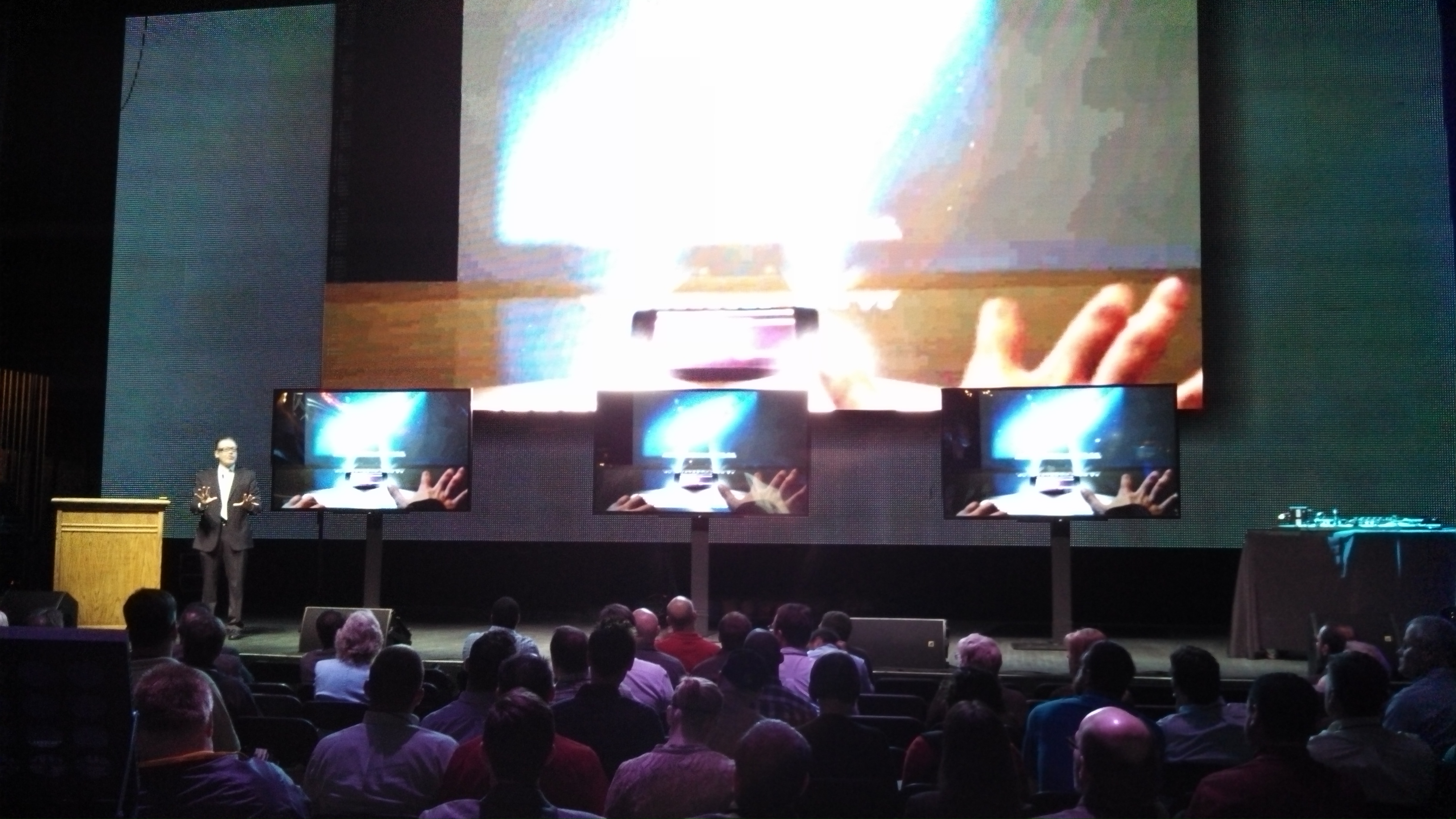 DETROIT — Change is coming so fast that we all have to be futurists just to live productively and meaningfully, futurist Michael Rogers told several hundred people at BlueWater Technologies’ TechExpo14 at Detroit’s Fillmore theater.

“We are at the beginning of an amazing transformation of our
civilization, almost as big perhaps as the invention of cities 5,000
years ago,” Rogers said. “This is virtualization, the colonization of
a new area. The winners in business will be those who can figure
out what belongs in the real world and what belongs in the virtual
world.”

Rogers said Moore’s Law — an observation by Intel co-founder
Gordon Moore that the processing power of electronics doubles
about every 18 months — will continue to hold true until about
2025, when electronics will bump into the physical limits of the
size of atoms, preventing further miniaturization. (That’s why a
32-inch flat screen TV that was $3,000 in 2006 is on sale now for
$189.) But more important, he said, is Metcalfe’s Law, coined by
Ethernet inventer Robert Metcalfe, that the value of a
communications network is proportional to the square of the
number of connected users of the system. That’s how Facebook
managed to grow from 150,000 users in 2006 to 1.1 billion
today.

And that growth will only continue, with innovations like projected
keyboards and screens for your smartphone, and wearable
computers in glasses that will project images to augment the
reality you’re seeing (so, for example, doctors can call up patient
vitals and medical images while they’re looking at the patient).
Smart watches, Rogers said, are still in their infancy — about like
cell phones when they were the size of shoes — but they’ll get
better.

Those cheap flat panels mean that screens will be everywhere,
cheaper than printed signs. That means your waiter at the
restaurant of the future will probably be a sassy avatar on a
screen.

The millennial generation, Rogers said, will take all this for
granted — and will want to work more in telepresence. Office time
will be only for collaboration — “cubicle work” you can do
anywhere.

Finally, Rogers predicted smart objects everywhere — tiny web-
connected sensors on everything, powered by vibration or heat
differentials in spaces or even the radio energy that’s everywhere
in the air these days. There will be heart monitors that look like
bandages, baby monitors knit into Onesies, and most especially
smart houses — thermostats and appliances and heating-cooling
systems that all talk to each other and manage your house for
maximum energy conservation and comfort.

Cars will be smart too — they’ll talk to each other so improve
safety if the other guy does something stupid behind the wheel.

Rogers also offered several bits of tech advice for those in
business:
* “Shoot ahead of the duck,” meaning that whatever technology
you buy, it has to have “headroom” in its usability and
sophistication, so you can hang onto it and use it probably longer
than you think you will
* Every industry is developing tech standards — make sure
whatever technology you buy complies. “Software will be useless
unless it can connect to everything around it” through those
standards, Rogers said.
* Make sure your technology is easy to use. Test this by testing it
on the least technically sophisticated person in your organization
under the most stressful conditions possible. If it doesn’t work
under those circumstances, don’t buy it.
* Every small businses needs to do R&D — which can be no
more than one staffer spending some time thinking about
something other than operational duties, namely, the future.
* What does a futurist read? Rogers mentioned two magazines —
the IEEE Spectrum and the MIT Technology Review — and a
blog from The Institute For The Future.
* Rogers said the future of cars from now through the mid-’20s is
plug-in hybrids. Total vehicle electrification is farther off, due to
limitations in both batteries and the rickety power grid.