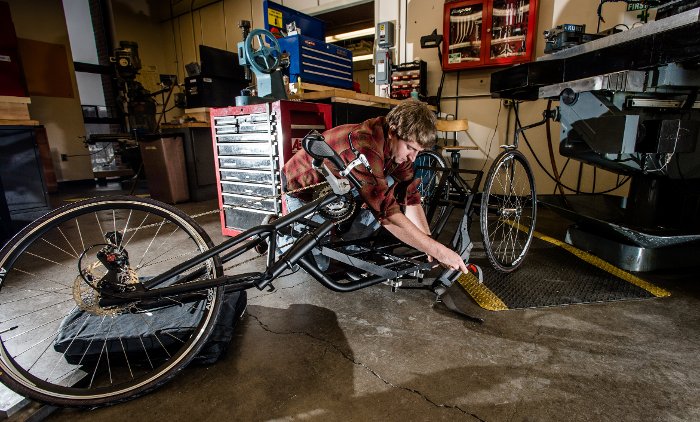 HOUGHTON — It started out as a senior class project. It ended up as a passion for a team of engineering students and their unlikely partners, a group of wounded veterans.

Now a TV documentary has been made about the handcycles designed and built by Michigan Technological University engineering students for the athletes of the Achilles Freedom Team — wounded veterans who race in marathons.

The documentary is called “The Wings of Angels,” and it premieres this month on the American Heroes channel, a Discovery Network cable channel formerly known as The Military Channel.

The 50-minute documentary follows the lives of two wounded veterans who have become Achilles Freedom Team marathon handcyclists, and the teams of Michigan Tech students who designed, built, tested and refined handcycles for them.

In 2012, when the project began, the handcycles available to the wounded veterans, many of whom have lost one or both legs, left a lot to be desired. So General Motors, a longtime corporate partner of Michigan Tech and supporter of the military and the Achilles Freedom Team, underwrote a Senior Design project to design and build a better handcycle.

Senior Design is a capstone course in Michigan Tech’s Department of Mechanical Engineering-Engineering Mechanics, in which seniors work on real-world projects for industry partners.

“GM has a long history of supporting the military and have been sponsoring the Achilles Freedom Team of Wounded Vets for a number of years,” said Linda Stouffer, manager of vehicle purchase programs at GM. “Through that relationship, we realized that the handcycles that they were using in their marathon races were inferior, and we needed to help. It was a natural fit for our engineers to work with Michigan Tech students to help design better handcycles for these athletes.”

Teams of Michigan Tech seniors analyzed the failures of the handcycles on the market and came up with solutions to the problems. They built two prototypes and took them to the toughest judges in the world — the wounded veteran marathon handcyclists themselves.

Based on the veterans’ reactions and recommendations, the Michigan Tech students went back to their labs and tweaked their designs. A prototype handcycle was wheeled out on the field at the 2012 Army-Navy football game, and Achilles team members rode the latest version of the handcycle in the 2013 Detroit Marathon.

Several Senior Design teams have worked on the handcycle so far, and another round of refinements will be developed by next fall’s seniors at Michigan Tech.

Stouffer said working on the project, and being able to document it, was “incredibly rewarding. It was wonderful to see the transformation of the students from this being just another assignment that was standing between them and graduation to really getting what this was all about — the altruistic facet. Every group of students that has worked on this project caught the passion for helping these heroes.”

Added Janet Patton, director of the Achilles Freedom Team of Wounded Veterans: “It’s a beautiful thing to see young minds connect with the sacrifices our Freedom Team members have made for this country. We are grateful that GM has provided an opportunity to these students to put their efforts to a worthwhile project for the athletes we serve.”

As one of the Achilles marathoners puts it in the documentary, “these students are amazing. They really care about helping us run with our hands.”