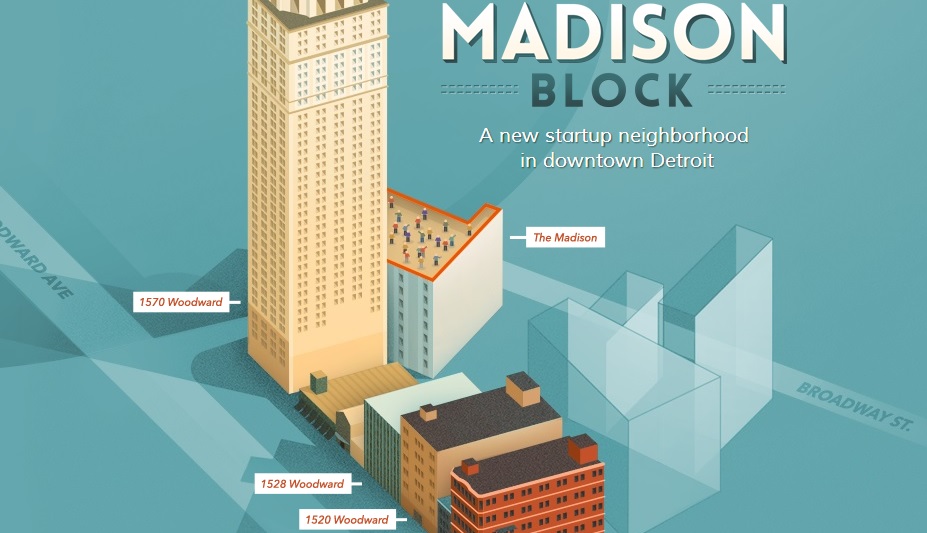 Gilbert’s Bedrock Real Estate Services announced Tuesday that technical and business experts from Microsoft Ventures will work in the M@dison Building to engage with the neighborhood’s startup community and develop business partnerships in the region.

Microsoft Ventures is a program designed to support founders at every stage of the startup. Through partnerships with tech hubs like the M@dison Block, Microsoft Ventures provides entrepreneurs with the tools and resources they need to build successful companies.

“This partnership is an extension of Microsoft’s commitment to the Detroit community and to the state of Michigan, which aims to provide people with the technology and training skills needed for the growing economy,” said John Fikany, the Southfield-based vice president of Microsoft’s big business relationships, which the company calls the U.S. commercial sector.

“In addition, it is important for us to participate and contribute to the growing technology hub downtown where startups and established companies are collaborating on driving innovation and growth,” Fikany said. “There is a ton of energy going on in Detroit, and we are excited to continue to be a part of it.”

The Detroit tech training company Grand Circus secured the partnership with Microsoft Ventures on behalf of the M@dison Block. The partnership provides entrepreneurs with a variety of services to support growth, including technology, mentors, and networking opportunities. Microsoft joins Google, Twitter, Uber, Detroit Labs, UpTo and numerous other tech companies in the M@dison Block.

“It is a great indicator for our community that Microsoft sees the value in the excitement, creativity and talent that is radiating out of the M@dison Block,” said Damien Rocchi, CEO of Grand Circus. “This partnership further cements the opportunities that exist for the tech industry in downtown Detroit and will continue to advance our tech hub. Tech companies of all shapes and sizes, from big-name brands to new start-ups, can be found writing code and doing business along Woodward Avenue.”