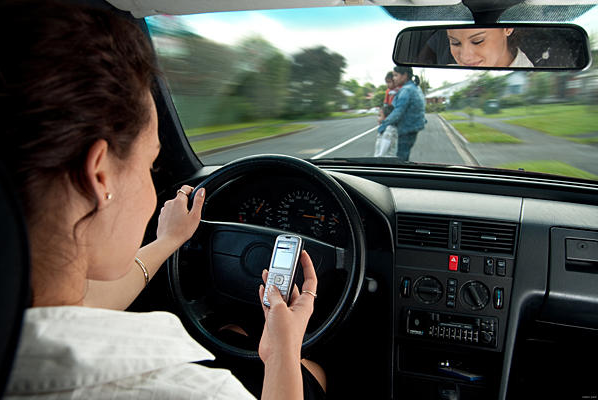 ANN ARBOR — Despite their precious cargo, parents are no less likely to engage in driving distractions like cell phone use than drivers from the general population, according to a new University of Michigan study published in Academic Pediatrics.

The study found that 90 percent of parent drivers said they engaged in at least one of the 10 distractions examined in the study while their child was a passenger and the vehicle was moving, says lead author Michelle L. Macy, M.D., an emergency medicine physician at the University of Michigan’s C.S. Mott Children’s Hospital.

But, importantly, drivers in this survey admitted to other distractions, such as giving food to their child more frequently than they disclosed talking on a mobile phone, Macy says.

“This just highlights the need to consider multiple sources of driver distraction when kids are passengers,” Macy said. “Giving food to a child or picking up a toy for a child not only requires a driver to take their hands off the wheel but also take their eyes off the road.”

Each year, more than 130,000 children younger than 13 are treated in U.S. emergency departments after motor-vehicle collision-related injuries. About one in six fatal motor-vehicle collisions in the U.S. in 2008 resulted from driver distraction, and Macy says that over time that percentage has likely increased.

Researchers also found that those parents with higher education and who were non-Hispanic whites were more likely to report mobile phone and directions-related distractions like use of navigation systems.

“If this finding is a result of greater access to technology among more highly educated and non-Hispanic white parents, we can expect the problem of technology-based distractions to expand because national rates of cell phone ownership in the U.S. have climbed above 90 percent,” Macy said.

The study was conducted by faculty from the UM Medical School, the UM School of Public Health and the UM Injury Center. It was conducted at the C.S. Mott Children’s Hospital pediatric emergency department in Ann Arbor and the Hurley Medical Center emergency department in Flint. The UM location serves a predominantly white, privately insured population and the Flint location has a higher proportion of African American patients and those who are covered by Medicaid.

The study is based on responses of 570 parents of 1- to 12-year-old children who arrived in the emergency departments of the two hospitals.

Macy says she is concerned as well about whether parents are modeling the right behaviors in front of children who will eventually learn to drive.

“We know there are some limitations to this study, especially that people are often reluctant to disclose that they engage in dangerous, and in the case of text messaging in Michigan, illegal behaviors while driving,” Macy said. “But our results do highlight the fact that child passengers are frequents being exposed to the risks of distracted driving. Efforts to improve child passenger safety have often focused on increased and proper use of restraining seats. But this study shows that reducing distractions and discouraging unsafe behaviors could prevent crashes.”