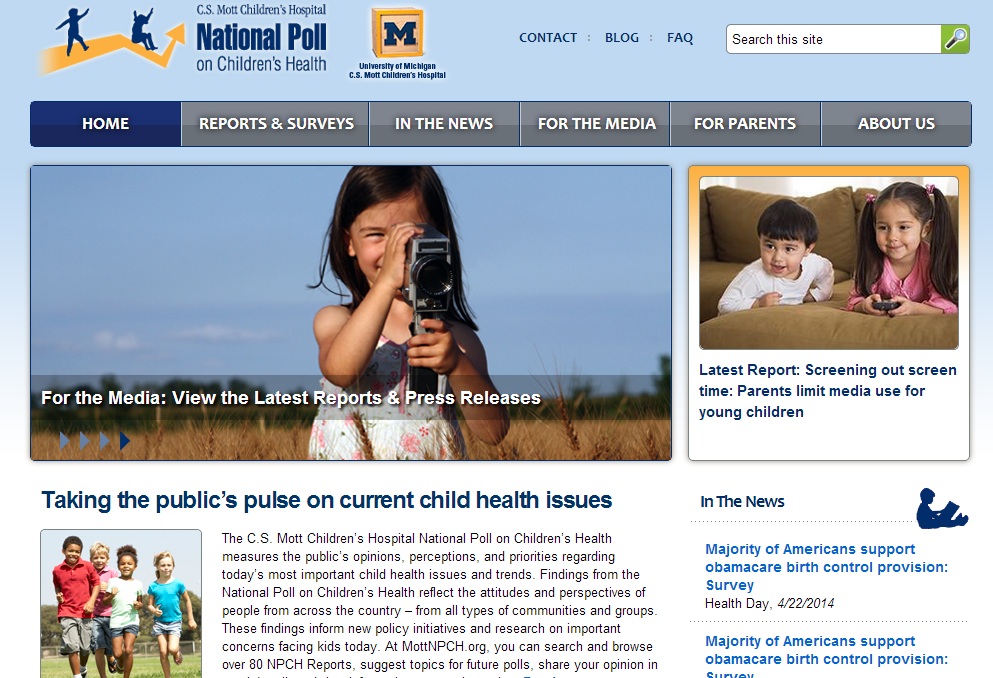 ANN ARBOR — About 25 percent of parents who have children ages 2 to 5 say their children get three or more hours of entertainment screen time a day, well beyond recommended limits, according to a new poll from the University of Michigan.

In the latest University of Michigan Mott Children’s Hospital National Poll on Children’s Health, a little more than half of those parents do try to set some limits by location: banning media devices from places like the bedroom or at mealtime.

In 2013, the American Academy of Pediatrics issued updated guidelines to recommend limits on screen time for children. The AAP discourages any screen time for children less than 2 years of age. For older children, the AAP recommends no more than two hours daily. The AAP suggests keeping media devices out of children’s bedrooms, keeping family routines like mealtime screen-free, and setting screen-free days for the whole family.

The poll found that 53 percent of parents are following recommendations that children’s entertainment screen time be limited by location. Twenty-eight percent said they use a combination of location and time limits.

But 13 percent said they do not limit entertainment screen time or locations for their young children.

The poll was administered in March 2014 and reflects the responses of 560 parents of children 1 to 5 years-old.

“In our poll, we found that one-quarter of parents of kids 2 to 5 years old are allowing more than three hours of entertainment screen time each day. That is more than is recommended,” said April Khadijah Inniss, M.D., pediatrician at the University of Michigan Health System and research fellow in the Robert Wood Johnson Foundation Clinical Scholars Program.

Added Matthew M. Davis, M.D., director of the poll: “When you get to three or four hours each day, that screen time crowds out other important activities that babies and young kids should be engaging in: looking at books, going for walks or playing outside.”

But Davis adds that limiting children’s screen time remains challenging. That screen time now goes beyond television and videos to smartphones and tablets.

More parental education in this case is not necessarily the answer. Children’s healthcare providers should try to understand and troubleshoot obstacles that young patients’ families are facing regarding screen time, said Davis, who is also professor of pediatrics and internal medicine at the UM Medical School and professor of public policy at UM’s Gerald R. Ford School of Public Policy. Davis recommends to his own patients and families that limiting by location is a good first step.

“The most common approaches to limiting screen time have more to do with location than counting minutes,” said Davis, who also is professor of Health Management and Policy at U-M’s School of Public Health. “That makes sense. It’s easier to say no smartphones at the table, than to be watching the clock.”

Inniss says the national conversation about children and screen time has to expand to include quality as well as quantity.

“Future efforts must concentrate on how media sectors concerned with children’s healthy development can work together to produce and promote higher quality screen-based experiences,” Inniss said. “This is an important next stage, because there is growing evidence that how young children interact with screen media is at least as important as how much time they spend.”

For the full report, visit this link.

The survey was conducted exclusively by German global market research firm GfK, which has 25 U.S. offices, including one in Ann Arbor. The survey was conducted in March in a randomly selected, stratified group of adults age 18 or over from GfK’s KnowledgePanel that closely resembles the U.S. population. Responses from parents with a child age 1-5 (n=560) were used for this report. The sample was subsequently weighted to reflect population figures from the Census Bureau. The survey completion rate was 61 percent among panel members contacted to participate. The margin of error is 3 to 5 percentage points and higher among subgroups.