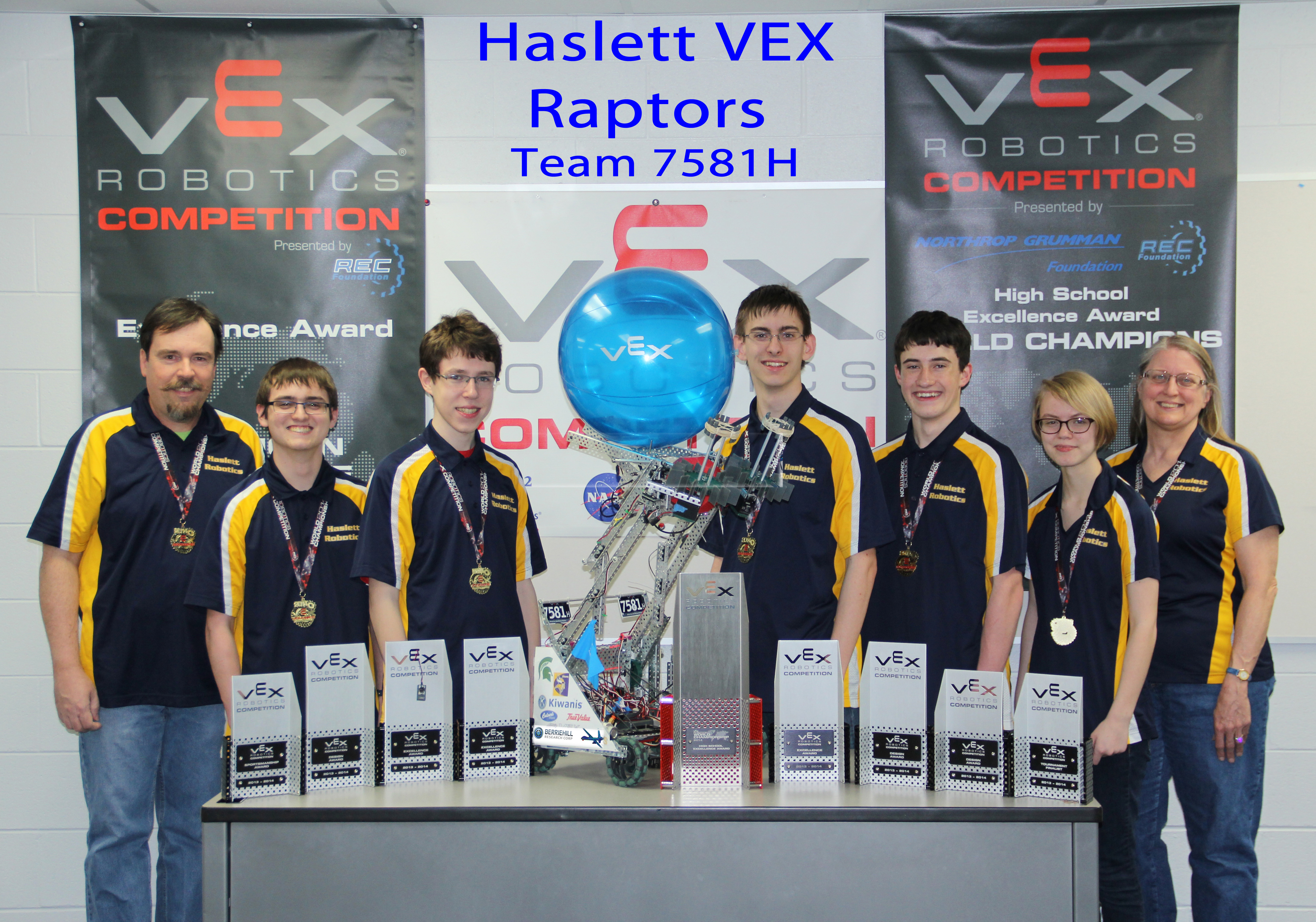 EAST LANSING — Chalk up another championship robotics team from Michigan.

Nik Buchholz, Hannah Kempel, Connor Rowley, Austin Scheerer and Matthew Watson, coaches Claus Buchholz and Kim Schramm, and “Kitt” the robot were awarded the highest honor in the Vex Robotics Championship (VRC) high school division. In the past six years, this is only the third high school team in the United States to win the Excellence Award.

“The Vex Excellence Award is a world-class honor that goes to the team with the most well-rounded Vex Robotics program,” said Drew Kim, assistant to the dean for recruitment, scholarship and K-12 outreach in the MSU College of Engineering. “MSU is proud that one of the 34 teams that the university sponsors did so well at Vex World Games and is such an outstanding example of the science and engineering skills being developed here in our state.”

The team is sponsored by the Michigan State University College of Engineering. It qualified for world games by taking top honors during the Michigan Vex Robotics State High School Championship, hosted by MSU in March.

The Haslett VEX Raptors also finished near the top of the Science Division. The team has qualified and competed for the world championship each year since they were founded four years ago.

The second team from Haslett at world games, the Haslett Vortex team, placed 56th in the math division, an outstanding result for their first time at the intensely competitive international level. This team was started with funding from The Foundation for Haslett Schools.

The Raptors and Vortex teams are among the seven award-winning teams of the Haslett Robotics Club.

A chance to see the trophies and learn more about how to join one of Haslett’s seven award-winning robotics teams will be available at the Haslett Robotics Club open house in the Haslett Middle School cafeteria on Thursday, May 8, from 6 to 8 p.m.

The DeWitt Robotics team 1581C competed at world games in the math division and finished 77th. DeWitt also has a history of having teams consistently qualify for world games in the past several years. Also, Youthville Detroit Robotics Team 4540D, also sponsored by MSU, made it to quarterfinals during world games.

Michigan excels in a wide variety of robotics competitions. The state currently has the highest number of FIRST Robotics Competition teams in the nation, as well as a large and rapidly increasing number of teams in other robotics leagues such as Vex, FLL, and Vex IQ.

See photos from VEX world games on Flickr at this link.

More than 15,000 participants gathered at the Anaheim Convention Center from April 23-26 to demonstrate their Science, Technology, Engineering, and Math skills by going head to head with custom-built and programmed robots. Vex now has 10,000 teams active in 33 countries.