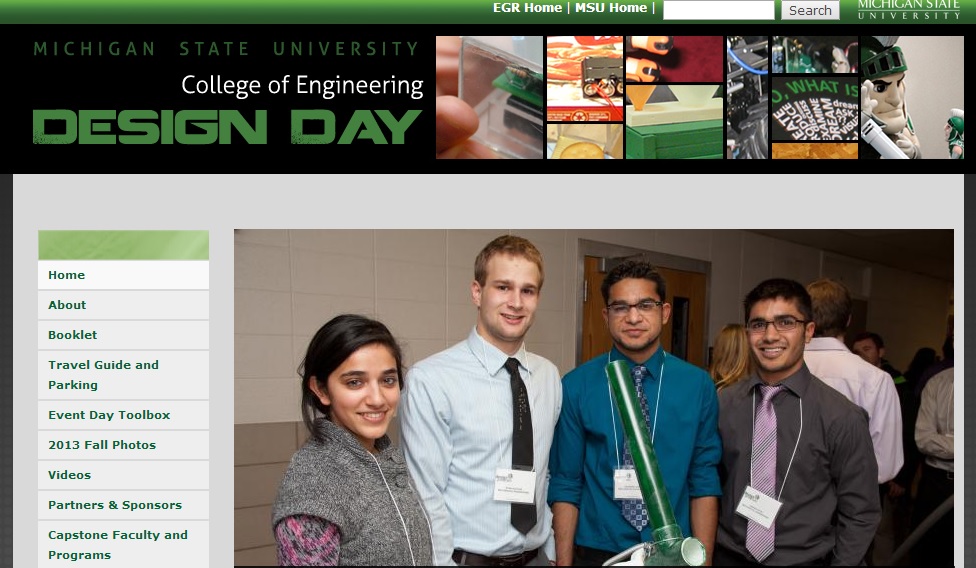 EAST LANSING — If you’re worried about America’s future as a world-class innovator, go to the next Michigan State University College of Engineering Design Day.

The 20th anniversary edition of Design Day took place Friday, a week
before graduation, and provided a glimpse into the seemingly endless
inventiveness and problem-solving capability of the American engineer.

Spartan engineers “excel at solving unstructured problems” involving
design and construction of innovative products, according to Leo Kempel, acting dean of the college.

Added Wayne Dyksen, a computer science professor and executive
director of Design Day: “We start design in the first week of freshman year. Lots of programs don’t do design until the third year. We throw them into teams and make them start designing and building stuff right away — before they’ve had thermodynamics, before they’ve had physics.”

The result, they said, are engineers who are willing to roll up their sleeves and get things done — and who are used to working in teams and making presentations, even in areas they’re still learning.

To get an idea just how cool Design Day is, just walk around the 150-some teams, comprised of more than 600 students. You’ll see stuff like this:

* A baby blanket embedded with blue LED lights designed to treat infants with jaundice caused by an insufficiently developed liver. Called Swaddle-Mi-Bili, the concept has already won a startup competition in East Lansing called The Hatch, a statewide startup competition called Green Light Michigan, and finished eighth at the Michigan Collegiate Innovation Prize competition. Next week, its creators are competing with it in a national startup competition in Utah.

* A check-in, check-out tracking system for mobile devices used to test the mobile apps of projct sponsor Quicken Loans (or anyone else, for that matter). The system uses cheap passive radio-frequency identification (RFID) tags to keep track of which technicians are checking out which company-owned devices to test apps. Team members were Jacob Riesser and Josh Rasor, both of Brighton, and K.P. Patel of Canton Township.

* An automatic parachute deployment system for model rockets, sponsored by Texas Instruments (which could sell a lot of them to serious model rocket hobbyists, of course). The system use an analog pressure sensor and a system to amplify its signal so a microcontroller can detect it. The controller keeps track of changes in altitude to automatically deploy a parachute at the optimum height. Team members — Michikazu Aono of Saline, Qiaosan Huang of Hunan, China, Pedro Rodriguez of Brighton, Max Cooper of Bellevue, Wash., Zane Crawford of West Bloomfield Township and Jessica Shelby of Tecumseh — said the device could probably be fabricated for $20 and sold for $60 to $80. The device was tested on a couple of model rockets, an elevator and a vacuum chamber.

* A prototype of a vehicle hood made of composite materials that could cut the weight of a hood from 33 pounds to 10 pounds. Team members Ben Cooper of Kalamaoo, Gustavo Gomes and Matheus Morais of Sao Paulo, Brazil, Jeff McCague of Brighton, and Matt Nees of Jackson said tests show the hood met the stiffness and strength tests of a steel hood, meaning it should be just as safe in a crash.

* A device that used a 3D printing machine to render a three-dimensional representation of an image on a computer that had been converted to grayscale and then turned into pixels — with obvious implications for assisting the visually impaired.

* Sparty Bird, a mechanical version of the highly addictive video game
Flappy Bird, a contraption in which players hit a button to raise or lower a Spartan football helmet, to keep it from crashing into bars of various heights that spin around on a cylinder. (The bars are colored dark blue, by the way. Wonder why?)

* Spartan Shootout, a shooting gallery game in which a smal slingshot is used to shoot marbles at Spartan football jerseys — and University of Michigan logos that occasionally pop up to block the shot.

There are also plenty of projects in MSU’s legacy area of agriculture, from pork and bean production process automation to process improvements in harvesting cherry tomatoes.

For information on sponsoring Design Day and design projects, contact Dyksen at dyksen@msu.edu or Jennifer Jennings, Design Day director, at jjenning@msu.edu. More about MSU’s college of engineering at www.egr.msu.edu.