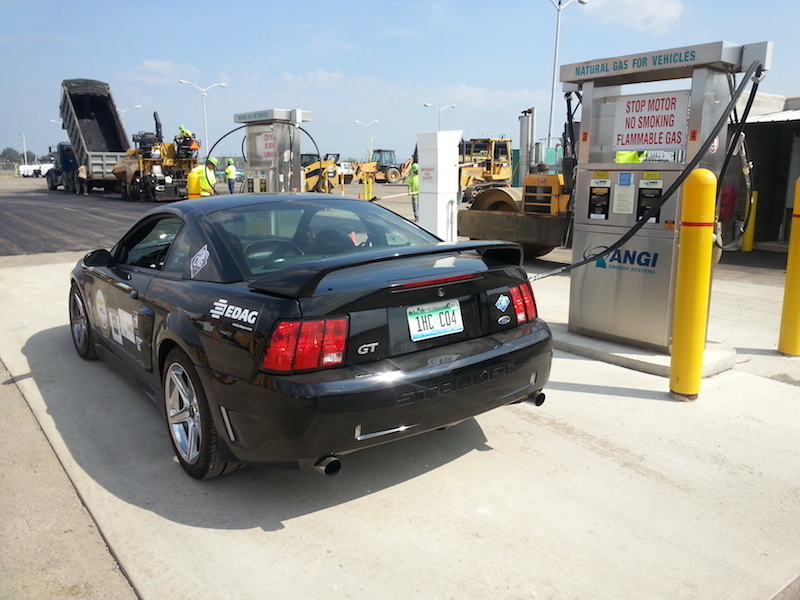 SHELBY TWP. — A Macomb County startup has launched a
fundraising campaign on the independent business funding site
Indiegogo to expand its work on converting gasoline powered
vehicles to compressed natural gas for the consumer market.

Companies like Livonia’s Roush are already offering CNG retrofits
to larger vehicles like delivery vans and utility trucks. But Daryl
Patrishkoff and his partners in Performance CNG LLC are targeting
passenger cars, trucks and SUVs.

Patrishkoff is a 40-year veteran in auto engineering who got into the
CNG market several years ago converting four vehicles for the American Natural Gas Alliance. The vehicles — a BMW X3, a GMC Denali, a Ford Mustang GT and a Hyundai Sonata — are now on a tour.

Last year, Patrishkoff and partners Todd Connolly, build technician,
and Doug Hall, calibration engineer, decided to go off on their own
with a CNG-retrofitted 2003 Mustang GT muscle car.

Patrishkoff self-funded the project and debuted the CNG Mustang
at the 2013 Woodward Dream Cruise. On a dynamometer, the
CNG-powered muscle car hit 469 horsepower at the rear wheels —
identical to the gasoline version.

With the Indiegogo funding, Patrishkoff said he wants to improve
the performance of the Mustang and get to work on his next CNG
car — a Jeep Rubicon.

On the Mustang, he said, “I believe we can increase horsepower
over the gasoline baseline. I believe we can select higher
performance CNG components, which will allow us to pack more
fuel in that combustion chamber. We also need to do a lot more
research to find out what’s going on in there under full throttle.”

As for the Jeep, he said, fuel flow can be a problem in off-road
vehicles going up, down or across steep angles. With CNG under
pressure, that won’t be a problem — another advantage for CNG.

And the advantages for CNG are many. Patrishkoff said that mile
per mile, CNG is 40 percent cheaper than gasoline today. Also, it’s
100 percent American — no imports. And it offers a 25 to 35 percent
reduction in harmful tailpipe emissions. And, Patrishkoff said he
believes natural gas conversion could be a major American job
creator.

More about Patrishkoff’s company at www.performcng.com. You
can donate to the Indiegogo campaign at
www.indiegogo.com/projects/street-legal-muscle-car-running-on-
cng/x/7109221. Patrishkoff is looking to raise $55,000 — $30,000
for EPA testing, $15,000 for high-performance CNG components
and $10,000 for engine calibration refinements and dyno testing.

Depending on their levels of contribution, backers can receive
brochures, technical documentation and continued project progress
updates of the project. The top donation level also receives two
invitations to the grand unveiling event.

But, most of all, they’ll be contributing to a cleaner environment and
a true path to U.S. energy independence.

Also assisting in the effort are the Center for Professional Studies,
the Troy technical trade school of which Patrishkoff is CEO, and
EDAG Group.

All unveiling events will be held at the Woodward Warehouse, a
collector car storage club. More at www.woodwardwarehouse.com.

CPS is a state-licensed vocational school focused on engineering,
technical training and consulting services. Since 1993 it has
certified more than 7,000 technical professionals at more than 400
companies in technical tools, techniques and methodologies. CPS
has invested money, time and resources to this program and
developed specific CNG curriculum to be used in engineering CNG
vehicle applications. More at www.cpspoly.com.